How is one organization using innovation and Coca Cola’s distribution channels to tackle health issues in the developing world? 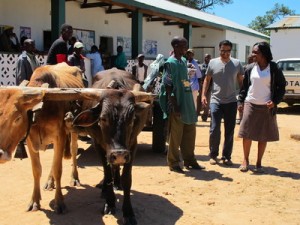 As pioneers in this space, ColaLife was recently the focus of a documentary, The Cola Road, and continues to carve new approaches to healthcare.


Aside from your involvement in ColaLife, you’re the founder & executive director of Antara Global Health Advisors. You’ve dedicated your professional life to public health; why is it so important to you?

Inequity exists in the world, this becomes clear when we look at health disparities between developed and developing countries – there’s no balance. The majority of the 6.6 million deaths that occur in children under the age of five each year are preventable with low-cost existing solutions. And yet they’re still dying because they’re not getting access to often simple interventions. It really seems out of sync that we can figure out how to use phones to read fingerprints from two feet away but we can’t get simple medicine to children because they live in a rural village.

Addressing these issues is simply a matter of our common humanity. At Antara, we work with organizations (corporations, innovators, philanthropists, NGOs, etc.) to help develop, implement, evaluate and scale solutions to address some of the worlds biggest challenges and restore some of that balance.

What’s the mission of ColaLife and how did you get involved?

My work is focused on global health delivery or implementation science, multi-sectoral partnerships and innovations for development. As part of my doctorate degree at John’s Hopkins, I was looking for a topic for my dissertation. The question of why Coke is found everywhere but life-saving medicine aren’t has been asked in health circles for years but no one had studied it. I researched whether anyone had looked into this already and came across Simon and Jane Berry of ColaLife, a small organization based in the UK, who had an early concept of using the empty spaces between Coke bottles in crates to transport public health commodities. I offered them public health expertise and suggested we partner. It was kismet.

ColaLife aims to build unlikely alliances to save children’s lives. We focused on diarrhea—the second leading cause of childhood mortality that is easily treatable with simple medicines of oral rehydration salts and zinc. But globally, coverage is very low. There’s a clear need to do something, to use new and innovative approaches to address the problem. Over the course of the last few years we’ve produced an anti-diarrhea kit which is at the heart of the ColaLife model.

Tell us more about the ColaLife model

It has three key components: First, there’s the product. We took a human-centered design approach working with our end users and created The Kit Yamoyo (‘Kit of Life’). Like Coke, we made sure the product was attractive, affordable, contained high quality lifesaving medicines and tried to bring the science of delivery to the user level. So the kit includes a small bar of hand soap—which ties into the message of prevention not normally something you see in other kits— and an instruction pamphlet which doubles as a branding for the product.

One of the major innovations is the size of the Oral Rehydration Salts (ORS) sachet, which is 4.2-grams. Each makes up 200 ml of solution, versus the typical one litre. This is important because we found that approximately 40% of caregivers who used one litre sachets prepared them incorrectly (either too diluted or too concentrated) or used the ORS past 24 hrs risking contamination. With the Kit Yamoyo, the packaging itself also becomes a measuring, mixing and drinking device. We really looked at this from a systems perspective. We looked at the entire system—the gaps, challenges and how our multi-pronged model can address them.

Second, there’s the value chain. The idea was to tap into the same players involved in the Coca Cola system. We basically use existing networks of wholesalers and community retailers to get kits to customers at the community level, allowing profits to be made every step along the way, while still making it affordable. The third component is health promotion – creating a demand that pulls the product to community level instead of pushing it.

It’s a matter of seeing the gaps, figuring out how to fill them and who to partner with, using existing networks and systems to get the job done instead of creating new parallel systems.

Zambia was chosen for the pilot project. Why?

First, diarrhea is major cause of preventable death in children under five in Zambia and accounts for 9% of all under five mortality, making it the third leading cause of death (globally it’s the second leading cause of death). And when it comes to managing it effectively, Zambia faces many of the typical challenges faced by developing nations so it was a good testing ground. For example, 61% of population lives in rural areas, there’s a serious lack of human resources for health and there are 7 or 8 nurses or midwives per 10,000 people.

Also a lot of rural health facilities are understaffed and over capacity. It’s also landlocked with no seaport access and low-road penetration into rural areas so the supply chain problem becomes a major one. And the Ministry of Health was very supportive of private-public sector partnerships and innovative methods for addressing coverage and access issues.

What were the results of the 12-month trial?

Before we started the project, less than 1% of children with diarrhea were given a combination of ORS and zinc. The health centre was the only place with access to ORS and Zinc and when there wasn’t a stock-out (which happened often), they often weren’t prescribing zinc as part of therapy. Most health centres don’t operate on demand or need – they receive monthly packages as part of a very basic supply chain system.

By the end of the pilot, of the children who had diarrhea in the two weeks preceding our survey, 45% used combination therapy from the kit. And retailers bought over 26,000 kits. Caregivers were traveling an average of 7.3 km to get to health access points but, with the kits, they only needed to travel an average of 2.4 km (to their local store).

You originally had one concept in mind but that evolved during the pilot phase. Can you explain?

It was originally designed to make it easier for retailers to carry the kit back to their communities; they’re going to buy coke anyway so let’s fit kits into the empty spaces between the coke bottles. What our trial found, though, was that only 4% of our retailers used that method of transporting the kits, despite a huge demand for them. Many retailers, for example, just carried boxes of kits on their bikes.

Bottom line: it wasn’t necessary to fit kits into empty crate spaces, rather the original innovation concept was not as important as the other innovations that serendipitously came out of it. We realized the importance was space in the market, not space in the crate.

Not having to shape kits a certain way (to fit into a crate’s empty spaces) allowed us to manufacture 100% locally, substantially reducing the cost. We now have two new formats – a screw-top jar and a flexible pack.

We’ve been able to establish that the model works and now we’re moving to local production as part of our scale-up strategy in Zambia, expanding to other parts of the country, reaching more children. We’re concurrently exploring how it may work in other contexts and countries. As part of the scale-up we’re expanding to urban markets as well, and also doing some research on price elasticity and willingness to pay.

We’ve partnered with a local pharmaceutical company called Pharmanova who’ll be manufacturing the ORS and zinc (one of the first to do so in Zambia) and the mini sachets. The new jar is also locally produced, as will be the soap.

In line with open innovation approach, we’ve been sharing along the way, including our results and lessons learned (see www.colalife.org). We feel it’s very important.

We are still seeking funding partners to help support the scale-up. This is a vital component and necessary to help build the market and continue learning so we can improve the model to maximize impact. So often we have international development projects and we don’t learn from them. We need to be able to measure impact and processes that go into this and that’s really what we’re going to be focused on. We hope to influence policy discussions at the global level; we need to measure things to do our jobs effectively.

A commitment of $3.5B between 2015 and 2020 was announced at the Maternal, Newborn and Child Health Summit. How does that make you feel?

It was a welcomed surprise. As a country, we have played an important leadership role in the Maternal and Child Health space internationally and this will help drive that momentum forward. As noted by Margaret Chan, DG of the WHO, at the Summit, this will allow us to ‘walk the talk’. It remains to be seen how this funding will be allocated and spent, but with a priority focus on strengthening health systems, improving nutrition, and reducing the burden of leading diseases, Antara Global Health Advisors, and models like ColaLife’s (which address all 3 of these priorities), represent good value for money and should be well positioned to help reach strategic objectives. If allocated in the right way, this funding has the potential to save millions of lives.

For example, it is estimated that simple interventions and packages of care for diarrhoea and pneumonia, if implemented at present annual rates of increase, could save 54% of diarrhoea and 51% of pneumonia deaths by 2025 at a cost of $3.8B. If coverage of these evidence-based interventions were scaled up to at least 80%, and that for immunizations to at least 90%, 95% of diarrhoea and 67% of pneumonia deaths in children under 5 could be eliminated by 2025 at a cost of just $6.72B. Given these figures, one gets the sense that if other donor countries follow Canada’s lead, we will be well on our way towards addressing some of the world’s greatest global health challenges.