Groupe Convex: A Study in Social Return on Investment 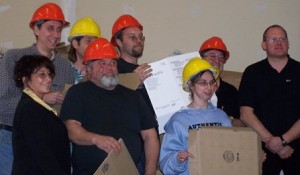 Groupe Convex (GC) is a nonprofit organization that oversees a network of eight social purpose enterprises based in the Prescott-Russell region of Eastern Ontario, Canada. With a mission of helping people with intellectual disabilities find employment, thereby establishing themselves as valuable, active and equal members of society, the organization currently has 160 employees, 70% of whom facing significant challenges in the job market.

Its varied employees work at one of the following supported social enterprises: a printing shop, a café, an antique refurbishing shop, a woodshop, a three-location transfer site for recyclable materials, a packaging and assembly facility, a service business offering indoor-outdoor maintenance, moving and painting services, and a farm labour pool that operates vegetable stands in various villages.

Common to every job GC offers is a long-term commitment to creating work of value— stimulating, team-oriented with opportunities for skills development and fair compensation. But here’s the thing that makes GC even more unique: beyond its role as an employer with a social purpose, it also acts as a catalyst for change, encouraging the community to view those with intellectual disabilities not as secondary citizens or “clients” but contributing, equal members.

Looking through the SROI lens

For the purpose of this case study, one part of GC was examined through the lens of Social Return on Investment (SROI). By applying the framework to its assessment of one social purpose enterprise under GC’s umbrella, the hope was not only to gather measurable results but to discern whether a SROI approach was a valuable one with which to evaluate all of GC and its social purpose businesses moving forward.

For those not well-versed in the language of SROI, here’s a brief primer: A modification of the term Return on Investment (ROI), made popular by traditional investors, social return on investment refers to the social impact of an organization’s operations in dollar terms as it relates to the investment needed to create that impact (and not including financial returns to investors). As for the “social” element of the term, it refers to the impact on all non-investor stakeholders affected by the organization in question, including individuals, employees, communities, and society.

Up until now, when measuring the impact of its social purpose enterprises, GC focused on a number of indicators – it found it had impact on the community, for example, as a result of the capacity to learning it offered. But the organization wasn’t monetizing its quantifiable social impacts and costs into a SROI metric – though it was looking to adopt one.

The SROI methodology adopted by GC for these purposes was based largely on what’s called the UK SROI method, a popular method for many projects, many of whom published on the SROI Network website. The steps for carrying out an effective SROI analysis, according to the UK SROI method, are the following:

But here’s the thing about SROI: calculating it accurately is far from an easy task. Making it tougher are the limitations that currently exist in the methodology. Perhaps one of the bigger issues is the extreme focus on monetization to the detriment of other elements in the process, making it hard to demonstrate long-term social impact.

There’s also no current external accreditation that exists for SROI and the process takes an extensive amount of an organization’s time to employ effectively due to limited access to information. Moreover—and some would say even more importantly – there are a number of impacts, such as the increased self-esteem of employees, that are difficult to assess using a monetary value.

Not surprisingly, the researchers point out that, “Determining SROI remains more of an art than a science,” adding that any exceptions or caveats must be noted during the intense process. Still, conducting an SROI does offer organizations an important inside look that can help it evaluate its future steps, while giving external investors and prospective partners quantitative fodder from which to determine their position as well.

And so GC chose one social purpose business – Recycle Action – and took a deeper look. Recycle Action (RA) is the largest collection site for recyclable materials in the area, including Blue Box materials, paper products, plastics metal products and electronics. It was chosen for the SROI consult because it requires a substantial financial investment to start-up and operate—it represents GC’s largest capital investment, in fact—and RA is currently the largest employer among GC’s businesses.

The SROI process was an extensive one, involving a range of intense examinations which we won’t get into here. Instead, we’ll focus on a few interesting points and takeaways. For one thing, the team focused primarily on the quantifiable investments and returns for its major stakeholders, looking less closely at the peripheral ones. Starting by delineating the scope and a stakeholder analysis, it examined these stakeholders closely and the benefits they accrued as a result of RA.

For example, it looked closely at local business community investments. Local businesses sells recyclable material to RA where it would normally be sent as waste to a landfill site. The assessment that followed went something like this: If RA purchases 294 tonnes at $60/tonne of cardboard in a year from a local business, the cost for the local business to send the same quantity of cardboard to a landfill site would be $200/tonne. Therefore, it found, the annual savings of avoiding sending cardboard to the landfill is $58,800 ($200 x 294 tonnes). Other quantifiable benefits to local businesses include: not having to travel to a processing plant further away, waste management cost savings and increase in revenues due to greater local employment. And the consultation continued in that vein for all other stakeholders.

Ultimately, the SROI analysis of RA concluded that it—and all of GC for that matter— represented a significant value in terms of contributions. The assessment was important because, despite having general support for their initiatives and its social mission, GC has a number of competitors, ordinary businesses doing much of the same work. Demonstrating a quantifiable social impact can prove essential for gain clients and investors.

SROI was a valuable process for other reasons too, offering the GC learnings they wouldn’t have garnered otherwise. As the researchers concluded, “We see this case study as a good example of action research where both researchers and community leaders worked together to generate knowledge in a process of mutual influence.” What they do with this information – and whether they adopt an SROI process for the rest of their social purpose businesses is yet to be seen.