How a Small Business Owner Brought Mobile Showers to the Streets

After attending a talk on homelessness in Los Angeles six years ago, Rachel Sunday felt that she needed to help. “I wanted to do something,” she says, “but I didn’t know what.” Sunday, a resident of LA’s Westchester neighborhood, thought about it for a couple of years, and then one day she took a shower after a bad day and realized how much better she felt. “That’s when it came to me—how it’s so amazing what a shower can do for somebody.” 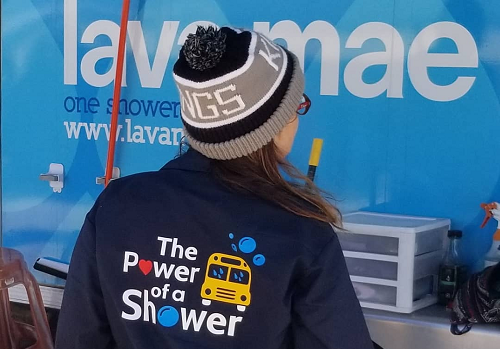 Sunday is the owner of a private brokerage firm specializing in employee benefits, and she reached out to one of her networking groups, saying she wanted to provide showers for unhoused people. One of the members replied, “Have you heard of Lava Mae?”

Sunday contacted LavaMaeX and was invited to a two-day seminar in LA. By the time she and her husband, Aaron, arrived, they had already established their own organization, Power of a Shower, as a 501(c)3 and had scheduled their first fundraiser. “By the end of the course,” Sunday says, “they could see how serious we were about doing this.”

Their timing was perfect. LavaMaeX was in the process of relaunching itself as an accelerator organization that teaches people around the world to bring mobile showers and other essential care services to the street, and the organization was paring down its direct service to a few core locations. LavaMaeX made the Sundays an offer: If Power of a Shower would volunteer every Thursday for six months for training and take over LavaMaeX’s Venice Beach, Calif., site, LavaMaeX would donate the site truck and trailer to get them started.

Power of a Shower was the first organization LavaMaeX mentored in piloting its consulting program. To learn the ropes, Sunday and Aaron volunteered alongside LavaMaeX’s Joey Freid and Amber Wise at the Venice Beach site.

Freid and Wise started by teaching the Sundays about LavaMaeX’s concept of Radical Hospitality®, the ethos of meeting people where they are and treating them as cherished guests. “It was like, ‘These people are coming to a hotel and we’re going to give them a white fluffy towel, just like any five-star hotel, and we’re going to let them select the shampoo and conditioner they want, because they never get options,’” Sunday recalls. The Sundays caught on quickly. “The guests really fell in love with them,” Freid says, “and they fell in love with the guests.”

While Wise coached Sunday on running the “front of the house,” Freid taught Aaron how to maneuver the truck and trailer through Venice’s narrow, congested streets and walked him through the basics of trailer maintenance, from how to fix a hot-water heater that suddenly goes cold to how to replace a pump.

LavaMaeX also spent a lot of time with the duo on list management—crucial in a place with a large population of unhoused people. Power of a Shower offers 30 showers a day and usually places about 10 guests on the waiting list. Freid coached the family on the de-escalation techniques LavaMaeX has honed since its founding in 2013. He guided them through a situation in which a couple locked themselves into a stall, for example, and helped them calmly resolve a situation in which a guest became aggressive toward staff.

As he coached the couple, Freid got a chance to refine his teaching, figuring out what worked and what didn’t—which in turn helped him write LavaMaeX’s instruction manual. “I got very good at explaining why we did things the way we did, based on their questions,” he says.

After Power of a Shower launched on its own on June 13, 2018, the team continued to benefit from Freid’s expertise. “Between the two-day seminar and then our volunteering afterwards,” Sunday says, “it felt like a cohesive wraparound of seeing and doing and having LavaMaeX there with us to help, until they could lift their wing and let us do it by ourselves. After that, it was pretty smooth sailing.” 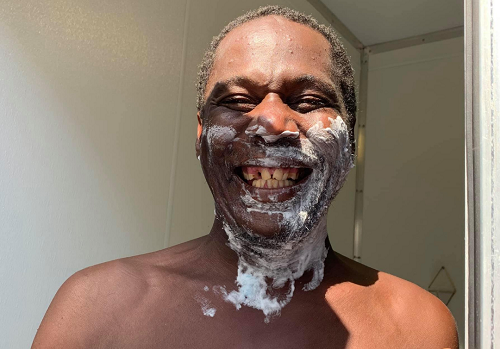 The site at Venice Beach’s main parking lot was already a successful, high-volume service center when Sunday, Aaron and their adult daughter Hayley “Xandy” Novack took it over. But Sunday leveraged her business connections—as well as LavaMaeX’s—to make it even better.

After launching, Power of a Shower added washcloths, clean underwear, and socks and gently worn clothing each week to the site’s amenities. Sunday’s business, Playa Vista Insurance Services, became the underwear sponsor for Power of a Shower. Her suppliers and partners provided other goods. One client, Sun Apparel, donated 17 boxes of sweatshirts—twice. Another client, Soft Gel Technologies, has been the official laundry sponsor for two years, donating enough to pay for the triple bleaching of all the towels. Even the laundromat donates to the organization. Other partners have supplied toothbrushes, toothpaste, bandages, hand sanitizer, tote bags and money. And through a LavaMaeX connection, Sunday reached out to Bombas, which donated 4,500 pairs of socks.

Power of a Shower measures its impact by how guests benefit from the service. Sunday tells the story of one young woman—a singer with “the voice of an angel”—who, since being a Power of a Shower guest, has found housing and is forming her own nonprofit for transitional housing. Another guest, an elderly man named Kenneth, showered with the service for several years before he found housing and a more stable life. It’s the people and the appreciation they express that keep the Sunday family coming back every week.

When other people approach her about starting their own shower service, Sunday always refers them to LavaMaeX. “I remember going to that initial two-day training, and the LavaMaeX staffers were saying, ‘The reason you’re here is we’ve already made all the mistakes. So you get the luxury of learning how to do it firsthand with fewer bumps in the road,’” she says. “And the fact that they can offer that and make that available to people throughout the world is awesome.” 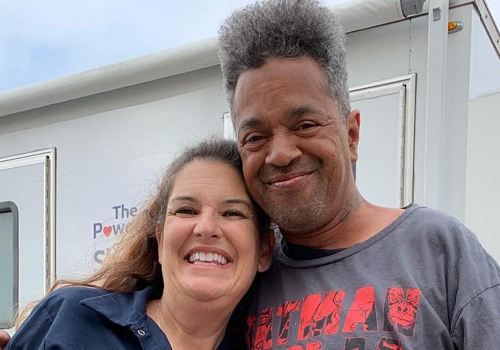 Power of a shower profile

Team: Rachel and Aaron Sunday, Xandy, and 63 total volunteers since Power of a Shower’s founding

Mobile unit: One trailer with three shower-and-toilet units, once of which is ADA accessible

Guests served: Power of a Shower has provided 5,730 showers since 2018