How Social Entrepreneurs are Tackling the Criminal Justice System

The United States houses 25 percent of the world’s prison population and, according to reports, spends $80 billion a year on incarceration. That means each American resident is paying around $260 annually to maintain the prison system. In California alone, $9 billion is spent a year on incarceration (five times the amount spent on education) while the recidivism rate sits at 60 percent, often due to lack of opportunities for employment upon re-entry.

But venture capitalist-Chris Redlitz was determined to change that. He’s one of many social entrepreneurs focused on tackling the broken prison system, with the realization that it poses numerous debilitating effects on society—including the increasingly high costs to taxpayers, poverty and homelessness that the formerly incarcerated face when they return to society looking for work (often unsuccessfully) and growing recidivism rates. Never mind the effects of broken and single-parent families on children and their communities.

Redlitz never anticipated becoming a social entrepreneur. But that was before the venture capitalist (managing partner of Transmedia Capital) visited San Quentin Prison—and before he learned about the realities of the prison system in the US. It led him to launch The Last Mile (TLM) in 2010 with his wife and business partner, Beverly Parenti, to combat the incarceration realities on the ground. What began as a six-month entrepreneurship program has grown into a powerful tool of change, providing employment and potential for the post-incarcerated—and a non-partisan voice to tackle the ever-growing issue of mass incarceration.

TLM began with the simple idea of teaching business skills and know-how.  Then in 2014, in partnership with the California Department of Corrections and Rehabilitation and CalPIA, TLM launched the first computer coding curriculum in a United States prison. In 2016, they started a TLMWorks, a web development studio inside San Quentin that provides graduates of TLM with jobs as software engineers. It’s all about making the students hirable. As of 2017, 240 people graduated from the program and are doing remarkably well. Over the next five years and beyond, they plan to bring their TLM-branded program to any interested facility and via remote broadcasts from their San Francisco-based studio.

Meanwhile, in Massachusetts, Molly Baldwin has been battling incarceration realities since 1988 as the founder and CEO of Roca, an organization with the apt tagline “less jail, more future”. Roca targets high-risk young men, gang members and high-risk young mothers with one simple but exhausting mission: to disrupt the cycle of incarceration and poverty by helping those most at-risk who are not ready, willing or able to be a part of any other program.

Roca serves 21 communities through four locations in and around Boston, three for men and one for women. They also run a transitional employment program that offers work experience with crews, cleaning parks and streets for the state, municipalities and private companies. And their impact is evident. In 2017, 274 men were enrolled in transitional employment, 84 percent avoided re-arrests and 226 were placed in jobs, with 76 percent remaining employed for over three months and counting.

Job creation is vital to Chicago-based Cleanslate too. Approximately 40,000 post-incarcerated individuals return each year to Illinois, with 20,000 or so converging upon Chicago, all in search of work. The social enterprise was launched 11 years ago by the Cara organization in the aftermath of the war on drugs that saw an abundance of people coming out of the prison system with no viable employment opportunities. Employers are seldom forgiving of conviction histories. 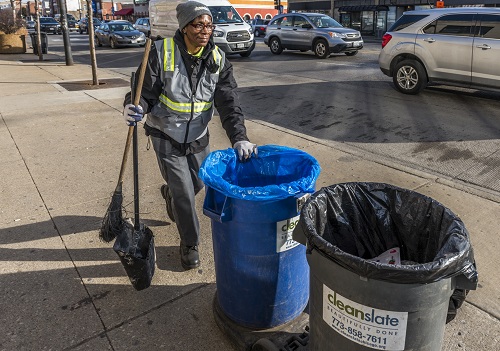 A Cleanslate intern working in Chicago

Like Redlitz and Baldwin, Kim is determined to change the status quo. They understand the domino effect of social challenges. And that, to tackle the failings of the criminal justice system, support systems and job opportunities are essential. Thanks to the insightful approach of these and other social entrepreneurs, we’re witnessing significant steps toward more resilient communities across the U.S.

Elisa Birnbaum is the publisher & editor-in-chief of SEE Change Magazine and host of its podcast. She’s also the author of the recently published book In the Business of Change, profiling social entrepreneurs around the world tackling challenges in their communities.