In Conversation with Juan Sostheim

Listen to a clip of Elisa’s interview with Juan at his ranch, from April 2010.

My driver, Javel, arrives at 9am sharp. I descend into his jeep, nod hello to my fellow passengers and spend the rest of the bumpy ride speaking Spanglish en route from La Fortuna to our ultimate destination: Rancho Margot, a self-sustaining ranch and farm, seemingly located in the middle of nowhere.

The very mention of Costa Rica typically brings to mind images of spine-tingling exploits like the zipline, as ubiquitous in this country as rice and beans. But, boasting one of the highest standards of living in the region, a dismantled army, and a goal of being the first carbon neutral country in the world, the destination is more than a haven for adventure seekers. With vast forests, fauna and wildlife, Costa Rica has an unparalleled commitment to the environment and is home to a growing number of advocates pushing sustainable boundaries.

Take former corporate maven Juan Sostheim. In 2002, he purchased approximately 400 acres of land with breathtaking volcanic views, primary rainforest, eleven natural springs and the largest river feeding Lake Arenal flowing through its property. Having travelled across the world witnessing examples of “paradise lost,” Sostheim was determined to do different. With an emphasis on protection and reforestation, Rancho Margot is ranch, farm, ecotourism destination and teaching community rolled up into one. Completely off-the-grid, energy is generated using micro hydroelectric power and methane biodigesters that make “good” use of animal waste. Just about everything used and consumed here is made in-house – from dairy and meat products to furniture, soap (processed from a variety of resources including coffee grinds) and insect repellent.

Visitors and volunteers who stay in deluxe bungalows or bunkhouses must roll up their sleeves, for there is much to do. There’s a dairy processing plant, free-range pigsty and chicken coop, a fishing pond, organic vegetable and medicinal garden, and a wildlife rescue centre currently under expansion. For those looking for more, there’s a river rock pool (filled with spring water) and garden, yoga centre, Spanish immersion classes, horseback riding and other activities.

Though his ideas were initially laughed at, today people are streaming in for a better look. Sostheim’s hope is for the place to eventually be recognized as the greatest educational, adventure-working ranch in Latin America, transitioning from a tourism-oriented resort to a thriving, teaching community. Future plans include offering courses in alternative energies, organic farming and reforestation. He’s also set on establishing housing developments and expanding his enterprising initiatives to include selling things like soap, pigs and microorganisms. And that’s just the beginning.

Let’s be honest, you need to be a little nuts to do this type of thing. What made you do it?

I agree. But when I saw the land, I knew what I wanted to do and it just all made sense. When I was in university, in the late 60s, I had ideals and goals but at some point you end up compromising and going into the wrong direction. I remembered a book by B.F. Skinner called Walden Two where he talked about a virtual community that he created. In general, it got me thinking and in later years I visited a kibbutz and saw what was going on in many places around the world and said I’d like to do something like that, but in my own way. One day I had that possibility and I said I’m going to grab it. 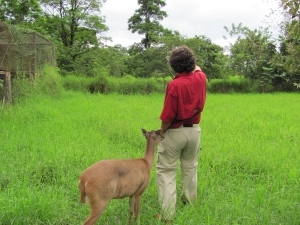 Can you sum up your vision? As you look around you, are you living up to it?

Yes. It’s still evolving and there are still things that I want to do, but yes, this is the vision that I had. I wanted to build a university basically based on the management of resources that would be useful for people living in rural settings. That was my goal. So how do you fund this? How do you go about it? You can try and go ahead and get a foundation going but that’s not sustainable. That’s not the way I saw this thing happening. So I said okay, I need to do tourism, which is something I knew little about. At the same time, I said what I really want to do is grow my own food and live off the grid, produce all my own things. What I need to do is teach people how to do that because I’ve seen it done and I see where things are heading and if we don’t teach the communities how to live more self-sufficient and sustainable, then they’re just going to become victims of the so-called progress that’s going on. So basically that’s what we decided to do.

You deliberately chose a spot that’s hard to find. Why?

Yeah, we only put up signs a week and a half ago… I was looking for people who wanted to come to the end of the road. You’ve got to be a certain type of person to come to this thing. So if you’re at the end of the road and want to find out what’s there….at the front it’s like looking through the peephole of the door. And that’s what I wanted. I wanted people to be curious because they need to be curious; they need to investigate things. I think there’s something important about that. You don’t have to be in the high traffic zone; you don’t have to be out there flashing your red lights all the time. You can do things in the middle of nowhere and people will find you if you’re doing something of value.

Education seems to be key for you. How does that play out?

We just got a partnership with Earth University, developing joint educational programs in organic agriculture and animal wellbeing. We got a lot of schools here in a very short period of time without any advertising and only through word of mouth.

There have been universities that have come here, including the University of Calgary, Ottawa, Western Washington University, University of Georgia, Arizona State, and the Harvard MBA program, who were here comparing different types of tourism in Costa Rica and the sustainability approaches that they have.

It’s always different. One university may be studying landscape architecture, for others it’s biology, entomology, agriculture. More and more it’s about sustainable tourism. A fellow from the University of Texas came here as a tourist. Then he asked me if he could volunteer, so he went home, packed his things, quit his job and came here.

I think our attitude is we want people to copy us and improve on what we do. We want to learn from them as much as we are teaching them. And you can do this almost anywhere. You can look at what you have. If you get your lemons, make lemonade. But if you have that can-do attitude, you can bring hope to these people and have them say, “Wow I can do that.”

A lot of what you do challenges established wisdom. Would you agree?

We do a lot of things to try to change things. Take cattle. Traditionally, they say you need between 7,000 and 10,000 square metres per animal. But we have a dairy and pastures and grow all the food they need. And we get it down to between 2,000 and 2,500 square metres. So we intensively manage the production of food and the animals, but in a healthy way. Now, people would say that’s too labour-intensive. Well maybe. But I think it’s about time we started thinking of keeping people working and the animal’s healthy as opposed to it doesn’t matter if animals get sick and we just have to rationalize everything down to making it as efficient as possible. At the end we are the victims. So these things need to change.

We try and teach people that they need to be in more control of things. You know today you go and see a pig sty with 5,000 pigs and they say they can’t make money. Why? He doesn’t control the food they get so he buys food that is produced and subsidized, etc. It’s concentrated with a lot of fillers and things that are not healthy to keep the cost down and the production down. He is caught between the guy that is giving him the food and the auction house that is paying him for that meat so he can process it. So he has to keep growing and growing the number of animals in a smaller and smaller space, causing environmental damage that is horrendous because it’s all detached from one another and at the end of the day who suffers? All of us.

The idea is to make a successful business by controlling more of those things that are in the whole process. This guy could make more money with 500 pigs if he could grow the food and process the meat. And it could be a much healthier thing. So we need to bring this community-sponsored agriculture type of approach to all, especially in countries in the developing world. In the US, it’s like trying to bend an old tree – it just won’t. So, until they hit rock bottom with some of these things, they’re not going to change. But you have a lot of people that need to make a change because otherwise there will be collateral damage.

I want to turn it into a real teaching community. I want people to come and live here and participate in sharing what they will. In the old days it was important the secrets that you kept; now it’s important to share what you know. We owe the environment, the landscape, and certainly all the inhabitants to go and improve things. I’m grateful that we can and I want to do that.

What keeps you pushing forward despite setbacks?

The definition of insanity that I love, the one that Einstein uses: do the same thing over and over again and expect different results. I try not to do that, I try to change things and I think the good thing is that most of the things I do work and so my definition of success is going from failure to failure with renewed optimism.

Thanks to Intrepid Travel for sponsoring Elisa’s trip to Costa Rica.