Investing in a Greener Future with CoPower 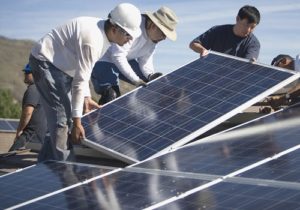 CoPower is a Canadian investment firm that is pioneering solutions in the field of green energy investment. Recently the company was awarded 2016 Social Enterprise of the Year at MaRS Social Finance Forum in Toronto, a title reserved for businesses driven towards economic and social prosperity as CoPower demonstrates through their business model.

CoPower has evolved as an answer to a growing problem in the green energy industry, explains marketing and engagement manager, Lauryn Drainie. “It is very hard for small-scale clean energy to access capital and get off the ground.” In fact 66% of projects in Canada are stalled due to lack of capital. But CoPower works to unlock capital for smaller projects facilitating a change to clean energy. The Canadian firm attracts capital from environmentally-conscious investors, who are thus supporting the development of green energy solutions, while also securing a profitable return.

It works in the reverse way as well. “Investors of all types who want to use investment portfolios for good, often have a hard time figuring out what they can actually do – it’s an investment world that can be hard to access,” says Drainie. CoPower acts as a middleman, linking impact investors with green startup projects. “We think all investors should have the opportunity to invest in benefit from the clean energy transition,” she adds, emphasizing the importance of making green bonds accessible.

“We know that to move the needle on climate change, we need to unlock hundreds of millions for clean energy, and we believe individual investors are the key to that.”

Initially, capital is deposited into the CoPower Warehouse Facility, which has a limited partnership with other firms. As demonstrated by the infographic below, CoPower then makes safe, secure loans to projects that satisfy a set of criteria. Namely, those receiving loans are community-scale clean energy projects whose revenues are generated through energy savings, or the sale of clean energy. CoPower finances ventures such as solar energy, geothermal heating and cooling, energy efficiency improvements, and LED lighting. 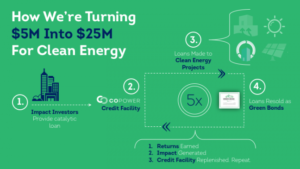 The sale of green bonds is integral to CoPower’s operational strategy. It makes direct investments much easier for the individual looking to support green energy solutions. The first wave of bonds were released in February 2016 and met with such success that early 2017 will see a second wave made available to the public. Both sets of green bonds start at $5,000 and are expected to offer a five percent annual interest over a five-year term. Green bonds are backed by the beneficiaries of pre-existing loans whose revenues are generated through clean energy production or energy savings. Through the sale of bonds, the credit facility is replenished and funds are cyclically available for the next project.

Initial costs for green energy solutions are often extreme, limiting the deployment of many ventures. CoPower seeks to lessen or eliminate such barriers to entry for environmentally minded businesses hoping to reduce CO2 emissions through investment. It’s a gap that mainstream investments cannot fill due to the relatively small nature of green energy projects. But CoPower is working to overcome the challenge with streamlined investments that offer solid financial returns.

To learn more about CoPower and the projects they support visit https://copower.me/en/