Microfinance Institutions are Facing an “Economic Tsunami”. How Will it Play Out?

The world has changed dramatically in the course of several weeks. The economic standstill caused by the pandemic has resulted in massive disruption, but in many ways the drama is just starting to unfold. The developing world is bracing itself for an economic shockwave whose scale, duration and long-term ramifications are difficult to predict. Microfinance institutions serve the needs of the under-served, but this strata of society is typically the least resilient when confronting financial shocks.

So how is this crisis likely to play out? I reached out to Elisabeth Rhyne, Paul DiLeo, Alex Silva and Ira Lieberman (bios below), microfinance experts who have witnessed past crises, to get their perspectives.

We are just at the beginning phase of this crisis, but how does it compare or contrast with others that you have witnessed and how is it likely to play out?

Alex Silva: The best metaphor would be a tsunami. We know an earthquake happened, we know that a wave might be coming, but we really don’t know or understand what the wave will look like. Sometimes the wave fizzles, sometimes it is strong, and sometimes there is more than one. We know it is coming, we just do not yet understand it. This crisis is different because it is impacting everyone across the board. When the price of oil drops, the impact is idiosyncratic. An oil dependent country might go into crisis, while another might benefit. This crisis is different because everyone will be impacted, we just don’t yet know the scope and scale.

Paul DiLeo: This crisis will likely accelerate certain trends that are already underway, such as more digital interactions between MFIs and their clients, but this will likely destroy much of the “high touch” capacity that many clients want and need. It may also lead to an overall destruction of capacity, setting the sector back for years or permanently, unless the recapitalization and consolidation process is handled well.

Ira Lieberman: Many MFIs, particularly smaller ones in rural areas, with a larger proportion of small, informal and women borrowers, are in danger of being overlooked as rescue efforts will likely focus on larger institutions with greater linkages to the financial system and macro-economy. The role that MFIs play in normal times, i.e. smoothing income through loans and savings, providing emergency funds, disseminating relevant information and guidance, etc. now mean the difference between life and death for many families.

Elisabeth Rhyne: There are some unusual aspects to this crisis. One is that while we do not know how much health suffering the virus will inflict, we already see the public health response inflicting economic suffering. What we know about the financial resilience of low income people around the world suggests that the majority of families who lose their livelihoods will use up their reserves within the first couple months of lock-down.

So it is no surprise that there is already a rising backlash against the trade-off governments are making: economic pain now versus uncertain physical suffering later. Another unusual aspect is that it is an ongoing crisis, not like natural disasters that do their damage and go away. As of now, we can’t see how it will end. No country is really out of danger yet, so we could be in for months and months of restrictions on activities as countries open up and then close down again. 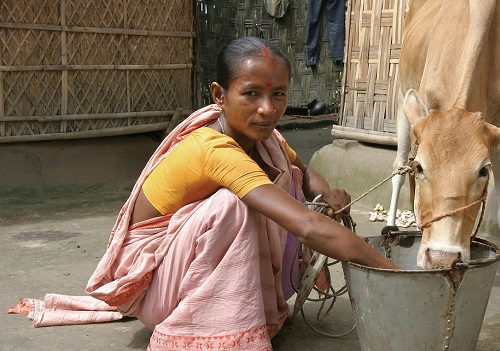 A microfinance client in Bangladesh

Which countries are going to be hit hardest or hurt the most? Are there any that are looking particularly vulnerable or more resilient?

Alex Silva: Economies that are dependent on remittances, tourism, foreign investment or commodities like oil will be more vulnerable. In addition, the level of preparedness in terms of governance and leadership will be a factor. This is war, so everyone should put aside politics and rally for the common good. I would also add that the preparedness of a country in terms of fiscal space going into the crisis will be important.

Countries with deficits and imbalances are more exposed. I am not sure that a weak regulator would be a risk factor. A strong regulator imposing liquidity and capital requirements can help, but in some countries much of the microfinance sector consists of non-regulated entities lending to the informal sector. In a crisis, being unregulated might actually help you.

In terms of their financial and non-financial characteristics, which microfinance institutions are more likely to survive this crisis?

Elisabeth Rhyne: A lot will depend on how regulators and investors treat them. Institutions that take deposits are vulnerable, as demand for withdrawals may rise dramatically even as loan repayments are falling. While many regulators are offering crisis liquidity support or forbearance to banks, MFIs and other small forms of financial institutions may not be included. In some countries they are not even being considered “essential businesses” and allowed to remain open. Investors will need to allow many institutions to break covenants and suspend debt repayments.

Alex Silva: Governance will be very important. If you have good governance in terms of the board of directors going into “crisis mode” and ensuring decisions are taken appropriately, i.e. cutting back on expenses, thinking ahead, etc., this will be critical. If your operations are more digital, you might be better off because you have lower operating expenses and you can make and receive payments electronically. If you are an MFI that is part of a strong international network, that can be helpful too, but keep in mind that because of the global nature of this crisis, networks are going to be impacted across the board.

Being part of a network that is weak or that is dealing with problems in multiple countries won’t necessarily be a significant help. If your country is on complete lock-down, then MFIs that exclusively do group lending will face challenges. MFIs that are non-profits that are unregulated might also fare better. As we saw during other crises, non-deposit taking NGOs won’t have regulatory requirements to raise fresh capital and they cannot be forced into bankruptcy by their lenders. They also tend to serve the poorest segments of society, so they might benefit from concessional money that becomes available.

Ira Lieberman: Regulators certainly have a role to play, but this rescue will need to be led by the main players dedicated to the microfinance ecosystem, i.e. investment funds, networks, industry associations and leading MFIs. Leaders in the microfinance sector will need to engage one another and develop a strategy for crisis resolution and for rescuing MFIs in distress while putting aside business as usual. The decades of work and accomplishment embodied in the microfinance industry today places it in a unique and critical position: to ensure that the world’s most vulnerable are not left to fend for themselves, as has so often been the case.

A few elements of this strategy that I would emphasize are first of all speed: sector leaders need to move now. They need to get out ahead of this if they have not already.  Second, this has to be a cooperative effort. Third, this will require agility and flexibility. It will be hard to get the response right initially, so the effort will have to evolve over time. Fourth, the response will require sector leaders to put new money and fresh resources on the table.

Alex Silva: Each country has its own specific circumstances. Having said that, regulators need to realize that MFIs, while representing a relatively small percentage of total assets, do serve a very large number of clients. This often overlooked fact will be important for getting them to “pay attention” to sector specific issues. They should temporarily soften loan loss provision regulations and/or capital adequacy ratio requirements.

Paul DiLeo: One measure that would probably be helpful from both the institutional and client perspective is to see if MFIs can be used to distribute cash grants in countries where other channels are not immediately available. There are presumably many, many clients who have already or will soon run out of cash and while some MFIs are contemplating “emergency loans” it is hard to see how these have a commercial basis.

How should microfinance institutions be preparing for the “tsunami?”

Alex Silva: Each case will be different depending on the country and MFI specifics, but that said, management should establish a “crisis committee” and make sure everyone is onboard and realizes the gravity of the situation. You have to assess the situation, making sure you have accurate projections and stress-testing based on realistic assumptions. Arrears will certainly go up, so a “sector by sector” analysis is essential.

Know how this will impact your liquidity situation, keeping in mind your lenders may delay scheduled disbursements and depositors will likely withdraw savings. Implement measures that are consistent with the projections. Take care of your people. Protect them. Hear their concerns. Reassure them. Provide leadership and motivate them. Take a good look at your operational risks and rethink all of them. What was working before might not be enough now. Negotiate with fund providers. Ask for grace periods or restructuring. If liquidity is tight, restrict disbursements and renewals.

Cut costs as much as possible. Risk limits should be adjusted according to the sectors most at risk. When communicating, make sure you have a clear and constant message out to all. This includes employees, clients, and stakeholders. Decide on what the message is and be consistent. Select spokespersons and make sure they are the only ones communicating.

Elisabeth Rhyne: While I know it is difficult when their own survival is at stake, MFIs should be asking how they can support their customers. Now is the time when they can uniquely be of great service, both in the way they conduct their regular business (credit moratoria, ensuring access to deposits) and in ways that are different from the routine – like providing information or channeling humanitarian relief. It is my hope that the investors and regulators who support MFIs will offer them breathing room in exchange for their efforts to reach out to customers and help them survive this crisis.

Alex Silva is a founding partner of OMTRIX and the executive director of Calmeadow, and previously worked as the head of the Central American Office of the Inter-American Investment Corporation (IIC).

Dr. Ira Lieberman is Chairman and CEO of LIPAM International, Inc. and has over four decades of international development and private sector experience. Dr. Lieberman was the first CEO of CGAP.

Elisabeth Rhyne is the former Head of the Center for Financial Inclusion at Accion International and was the director of the Office of Micro-enterprise Development at the U.S. Agency for International Development (USAID) from 1994 to 1998.

**This article was originally published in the Impact Money Blog. It was re-purposed with permission from the author.