On the Front Lines of Social Change 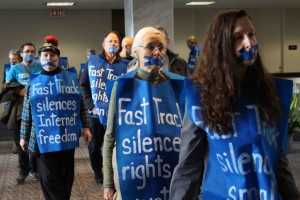 What does it feel like to stand up for what you believe in? It’s exciting, exhilarating, and scary. While there’s a part of me that takes pleasure in challenging the powers that be, my recent experience participating in a social action was a powerful reminder of how much courage it takes to be the change, and not just occasionally, but on a daily basis. After being confronted with the difficult choice of standing my ground and risking arrest or staying safe by not rocking the boat, I have a much deeper respect for the people who’ve chosen to dedicate their lives to making the world a better place for all of us.

The erosion of democracy is an issue I care deeply about. For me, democracy means more than periodically going to the voting booth to choose a political representative. It’s an integral part of my daily life—from the petitions I sign, to the causes I donate to, and the products and services I buy. All of these acts, as small and insignificant as they may seem, matter. Like many Americans, I’m also concerned about the strong influence that major corporations have in our political system.

It is for these reasons that I chose to participate in an action organized by Popular Resistance (think Occupy Movement 2.0) to halt an attempt by the U.S. Congress to approve fast track of the Trans Pacific Partnership (TPP). For those who are not already familiar with this issue, the TPP is an international trade agreement, which has been negotiated behind closed doors, and is believed to be more far-reaching than NAFTA in terms of the power provided to multinational corporations. Fast track gives President Obama the authority to sign this treaty before it goes to Congress with limited time for review and no amendments.

For the “Flood Congress to Stop Fast Track” action, a group of us dressed in blue and silently walked through Senate office buildings wearing signs that stated how fast track silences democracy. As the owner of a consulting practice, I chose one that said fast track silences the voice of small businesses. One of the things that stood out for me about this action was that, although the media was present, none were from the American press. I also noticed the relatively small size of our group – about 30 people – which was surprising considering the broad impact that the TPP will likely have on issues that civil society groups care about, such as the environment, labor, public services, and civil rights. Despite multiple threats of arrest by the Capital Police, we accomplished our objective: to express opposition to fast track to members of Congress.

Beyond “speaking up” for what I believe in, I also experienced what it is probably like for some of my clients who are on the frontlines of social change every day. I now have a better understanding of what it’s like to confront a system that is resistant to change and with forces firmly in place to keep it that way. I can also personally identify with the optimism and persistence needed to keep moving forward in the face of seemingly insurmountable obstacles as well as the importance of celebrating small victories. 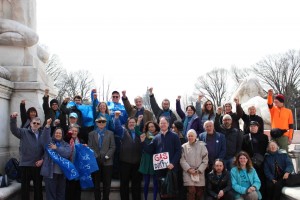 Coming away from this social action I’ve identified some insights that may be of interest to changemakers, whatever the type of movement you’re building:

Widen the tent. Actively seek out opportunities to connect with and enlist the support of other groups that are related to your cause. This could involve sharing information about activities, co-hosting events, and developing strategic partnerships. For example, Popular Resistance has organized a cross-movement group to organize and coordinate actions to stop TPP and similar trade agreements.

Get on the same page. Connect the dots by clearly explaining how movement actions contribute to the achievement of overall goals. Regularly solicit input from your supporters as they may have a unique perspective on the situation and can offer good ideas. Before we went to Congress, the organizers explained the purpose and plans for the action. They also solicited input from the group to ensure that there was a shared understanding and consensus.

Plan tight, hang loose. Have a back-up plan for when things don’t turn out as expected. Because the action was planned in advance with the input of everyone involved, we were able to adjust in the moment when circumstances changed by shortening the duration of the action while still accomplishing the objective.

Express gratitude. Make it a regular practice to show appreciation to the people who support your cause. At the end of the action the organizers thanked everyone who participated, including the media who covered the event. Beyond good manners, expressing gratitude is a way to recognize the sacrifices people make to support your cause. That day I met a woman who traveled hundreds of miles just to participate in the Flood Congress action.

Stay in touch. Follow-up to let people know the outcome of their support. Staying in touch and keeping your supporters informed can sustain momentum over the longer-run in addition to attracting new supporters over time. Later that day I received a message from the organizers thanking me for my participation in the action that also included links to a published story along with photos and a video to share with others in my network.

As a result, I feel greater solidarity with those who are on the frontlines of social change everyday. Participating in a social change movement has also strengthened my commitment to support changemakers within and beyond my consulting practice.

What are you doing to advance the causes that matter to you?

Kimberley Jutze is a socially responsible entrepreneur and Chief Change Architect at Shifting Patterns Consulting where she facilitates social change by working alongside start-up and early stage growth social enterprises to help them mobilize resources and strengthen their organizational capabilities so that they can make the best use of these funds. Aside from presenting at social enterprise and organization development events, she has written a case study for the 10th edition of Organization Development and Change and is the author of the “Nonprofit Funding and Long Term Sustainability” Social Good Guide scheduled to be published in 2014. Kimberley has a Master of Science in Organization Development from Pepperdine University and a Master of Arts in International Politics from American University.