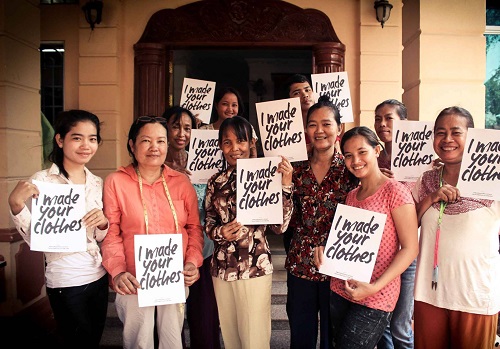 We live in an increasingly waste-filled world, and clothing companies are some of the worst offenders. Cloth left on the cutting room floor is discarded; materials that could be recycled are thrown away. Enter Tonlé, the fashion company that has chosen to respond to these problems by taking them as an opportunity instead. Tonlé is a zero-waste fashion company based in Cambodia.

A quick look through Tonlé’s online catalogues turns up dresses made of chiffon scraps and hand-painted with unique Cambodian designs, or shirts sewn together from cotton remnants, left over from the warehouses of well-known Western labels. Founder Rachel Fallar is responsible for a number of similar initiatives: these include a program called Fairsew, which establishes ethical practices in clothing factories, as well as general efforts to aid the workers involved. While the business is now run from San Francisco the focus is very much still on Cambodia and Cambodian workers, and it has become a sustainable means of addressing vital issues of wasted materials and unfair labour practices.

Many Western fashion companies produce clothing in factories in South-East Asia. Cambodia, in particular, has many such warehouses and factories, where workers are frequently paid low wages and many resources are wasted or simply thrown away. Some labels have started to take steps to reduce this waste. Nike has announced that a majority of its footwear contains recycled materials. H&M has introduced an in-store collection program, allowing customers to bring in previously purchased clothes to be recycled and offering them discounts and vouchers in return.

Ultimately, however, given the large scale of companies such as these ones, the complete elimination of waste is challenging. These businesses have not been able to eliminate the waste that arises as a side effect of the fashion production line to the extent that Tonlé has. Thanks to its small size, Tonlé is able to effectively ‘close the loop’, and cut out waste by using recycled or previously used materials for its products.

An additional but equally significant problem common to companies based in Cambodia and many other countries in South-East Asia is the treatment of their workers. Tonlé’s management is evidently keenly aware of this issue. They have worked to establish fair work practices and fair pay for all their employees. Initially, the company’s hiring policy was to focus on employing women who were HIV-positive, and who would hence have had difficulty in finding other jobs. They now make sure to promote the hiring of women in general, ensuring that employees are paid fairly for the work that they do, and that they are able to provide for their families.

The success of Tonlé is due, in part, to the fact that, unlike non-profits doing similar work, it is run as a business. It relies on the profit brought in by customers purchasing the clothes, and has been increasingly successful in this. It also depends on additional sources of profit; a recent Kickstarter campaign, in particular, was very effective. The initial goal of $10,000 USD was reached within four days, and $23,042 was donated in total, from nearly 300 backers. This went to promoting an arm of the business based in the US, as well as furthering efforts to sell the products in Europe and Australia and continuing to improve the Cambodian workshops. As a business incorporating many elements more similar to non-profits, Tonlé has evidently become a success.

Factories run by clothing companies in South-East Asia, and other areas, create a myriad of social issues. One of the less well-known problems is the amount of waste created by these factories, with useable materials often being discarded and thrown away. Tonlé responds to this issue and others, paying workers fairly to make good-quality garments from reclaimed fabrics. By successfully using business practices rather than running solely as a non-profit, Tonlé is able to run sustainably while making real change.

Rachel Kirk is an editorial intern at SEE Change Magazine. She is partway through a Bachelor of Arts/Laws (Hons) at the Australian National University, Canberra, focusing on English literature and human rights in international law. Her work has appeared in Voiceworks, Woroni, and Demos.