One Man’s Trash is Another Man’s Mission: A changemaker’s quest to clean up Newfoundland’s harbours

While touring Newfoundland and Labrador a few years ago, I felt I had arrived at the most pristine, unblemished part of the world. It certainly comes close. But a recent documentary, directed by Cody Westman, offers an eye-opening look at what lies beneath the breathtaking landscape in Canada’s most easterly province  – and what one man is doing about it.

“Hell or Clean Water”, which premiered virtually at the recent Hot Docs Canadian International Documentary Festival, follows the efforts of Shawn Bath, a commercial diver from Twillingate (one of my favourite spots in the region) who has made it his mission to clear the trash from Newfoundland’s majestic shores. 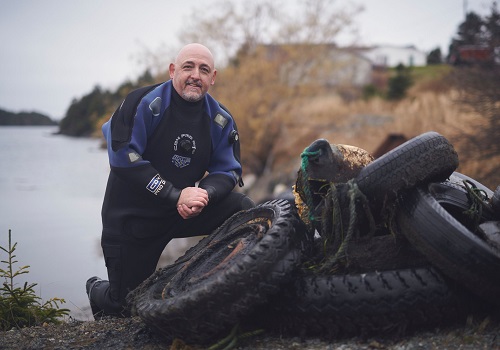 For the love of ocean

Much like bodies of water across the globe, a profusion of waste – from fishing nets, boat engines and plastic products, to tires and more tires – lie beneath the surface of N.L’s waterways that form 10,000 miles of coastline. Discarded objects are “out of sight, out of mind” to many, including, at one time, Bath himself (who admits to throwing garbage out his truck window in the past). But no longer.

The ocean has always been a second home to Bath. He started out as a cod fisherman before the cod moratorium of July 2, 1992 compelled him and 40,000 laid-off Newfoundlanders to pursue other work. For Bath, that work would be as a commercial diver searching for sea urchins, a career that sustained him for over 20 years.

It was during those dives that he first witnessed the level of waste left by humans in the waters, including thousands of “ghost nets”- abandoned fishing nets, which are notorious for destroying marine life. In fact, according to Bath, approximately 25 million ghost gear is lost in oceans every year.

The reality was no longer acceptable. Leaving the ocean in this state would be unfair to the next generation, Bath explains in the film. Disappointed with the inaction of others, he started a non-profit, Clean Harbours Initiative, and got to work – sometimes alone, other times with the help of friends (and the unwavering support of his girlfriend) hauling trash from the waters.

It hasn’t exactly been an easy go, with many ups and downs. But, for Bath there’s no looking back. “The main driving force was, and is, my love of the ocean, the need to restore the ocean, to help maintain a way of life for myself and all those who live off of the ocean….it was do or die, now or never,” he says adding, “Age is a huge factor too!”

Since he embarked on his mission a couple years ago, Bath has pulled over 50,000 pounds of trash from the Atlantic Ocean (much of it is recycled). But challenges remain. Reliant on donations, at one point in the doc we learn that Bath has $9 in his bank account and creditors breathing down his neck. His cell phone was cut seven times, and cable was cut too. Desperate for financial backing, we watch as he applies for grants and forges an unlikely partnership with the International Fund for Animal Welfare (IFAW), an animal protection group.

Which is good, on its face. Problem is, the organization has been blacklisted by many in the province for its efforts at ending the commercial seal hunt. But, with his eye on the prize – clean waters – Bath is not about to refuse IFAW’s support. And an improbable collaboration takes root.

We watch as Bath applies for a much-needed grant, gets his hopes up and then has it dashed when he gets rejected. “The loss is not mine, the loss is to the marine ecosystem,” he says upon hearing the devastating news. But even that doesn’t stop him. Eventually, Bath does receive funding from the government – and a donation of a $20-thousand-dollar boat, both of which are instrumental to his work. 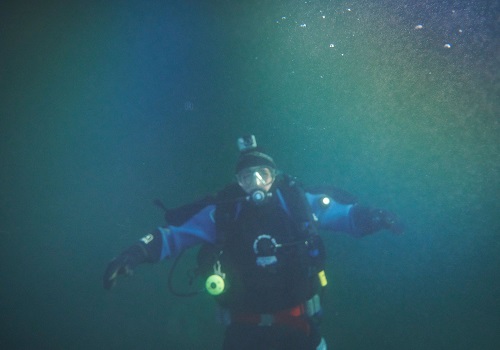 Bath hard at work in the waters of Newfoundland & Labrador

That gumption, that perseverance makes Bath such a compelling figure. “What keeps me going is the inability to accept another failure in my life…shear stubbornness!” he offers when I ask him about his capacity for resilience in the face of obstacles. “I knew if I didn’t succeed no one was ever going to try to do what I am trying to do and if I don’t succeed, that means the trash on the bottom of the ocean will be handed down to our children and grandchildren. We cannot hand it down to them in this mess.”

It’s that fiery spirit, one that won’t take no for an answer, that is unique to changemakers. It’s what elevates them beyond “good enough” and keeps them going when others would have stopped long ago (perhaps to the chagrin of his allied-albeit-exhausted girlfriend).

As for his long-term vision, Bath is clear. “I want to create an industry where people can make a living cleaning our ocean viruses destroying it,” he says. “When I die, I want to know that my initiative helped save many marine lives, like the right whales” (currently on the endangered species list).

It’s about the mission, after all. Aside from the impact he’s having each day, what makes Bath proud is the awareness that his work – and this documentary – has brought to the issue of ocean trash. “Since we’ve started, we see lots of other groups doing cleanups too!” he beams.

Which is great news since, let’s be honest, Bath (even with a team of three) can only accomplish so much. But, with the right support behind him, it’s clear Bath can lead this cause in big ways. “We are in awe with all the kind words and encouragement,” he shares. “We will continue to grow Clean Harbours Initiative through donations and hopefully through the support of our government. Together we are making a difference.”

“Hell or Clean Water” won the Rogers Audience Choice award at Hot Docs. It will be playing soon on CBC’s Documentary Channel.