Partnership Between Jewish Founders of Food Startup and UAE-based Producer a ‘Triumph of Coexistence, Peace and Mutual Respect’

D’vash Organics products are non-GMO, paleo-friendly, vegan, low-glycemic, and said to contain 25 percent less sugar than honey. Already a leader in the marketplace, the company – which produces natural superfood sweeteners from dates and sweet potatoes –  can be found in over 5,000 stores nationwide, including Costco, Whole Foods and Walmart. The partnership will allow D’vash to significantly grow their business via retail, wholesale, and e-commerce in the US and around the world, creating the world’s largest date-focused super brand, they say. 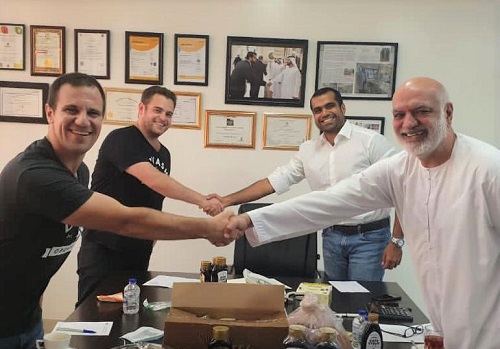 But that’s only part of the story. The deal by the Jewish founders (one of whom lives in Israel) and their Muslim partners wouldn’t have been possible without the Abraham Accords peace agreement between Israel and the UAE that was signed in 2020. The disclosure of Finkel and Czinn’s Jewish and Israeli roots was received warmly by their new Muslim partners in Dubai, and both sides see the partnership as an opportunity to promote tolerance and understanding.

SEE Change spoke with the founders of D’vash Organics to hear more about the unique collaboration, how it came about, and what it means not only for their business but for future opportunities for Jewish and Muslim partnerships.

Where are you from, where did you meet and what inspired you to launch D’Vash Organics?

We both hail from the Midwest (David is from Cleveland, Brian is from Chicago). We met during a gap year program between high school in Israel and bonded over our mutual passion for the region’s cuisine. We both returned to the US for college (both of us studied finance – David at the University of Maryland’s Smith School of Business, Brian at the University of Pennsylvania’s Wharton School). Shortly after graduating college, David moved to LA and entered the food industry, while Brian moved back to Israel. When Brian discovered how large the date syrup phenomenon was in Israel and throughout the Middle East, he pitched the idea of selling it in the US to David. David loved the idea, and D’vash Organics was born.

How did the deal with Al Barakah Dates Factory come about?

Al Barakah was one of our main suppliers for 2.5 years before they approached us last fall to join forces. They saw how quickly we were growing, and they loved our branding, our hustle, and our responsiveness. They also noticed that we were branching into new date product categories, many of which they already produce. All of this convinced them that joining forces would benefit them, and we were also very excited at the prospect of joining forces with the largest date product manufacturer in the world.

The deal would probably not have been possible a few years ago, what made it possible today?

The UAE and Israel didn’t have diplomatic relations until the Abraham Accords were signed in mid-2020. Due to this previous lack of diplomatic relations, we were careful not to disclose our Israeli and Jewish origins for the 2.5 years that we worked with Al Barakah. Once the deal was signed, Brian was able to fly directly from Tel Aviv to Dubai – where he was joined by David – to meet with the Al Barakah team. The initial meeting was at Dubai’s first kosher restaurant in the Burj Khalifa, which was opened immediately after the two countries made peace. We then disclosed our Jewish and Israeli origins and were warmly received by our hosts, who were excited to discuss the similarities between Arabic and Hebrew, Judaism and Islam, and Kosher and Halal dietary rules. The Abraham Accords made it easy for us to “break the ice” in a friendly and peaceful manner, without any of the concerns or discomfort that may have accompanied these types of relationships previously.

What does this deal mean to you, what does it say about the potential for others like it?

Strategically speaking, this deal positions us to become the world’s first date product super brand. While plenty of companies sell dates and date products, nobody has successfully created a brand that’s built around dates. With Al Barakah on our side, we have the power to do for dates what Coke has done for soft drinks or Heinz has done for condiments. But this deal is about much more than business, the products, or the companies involved. What excites us most about this partnership is how it brings together people of very different backgrounds to do great things. We’re honored to be doing our small part to build bridges of cooperation and mutual respect in the hopes of creating a more prosperous and peaceful future, and we certainly hope that many others follow our lead in the years to come.

How has the deal been received so far in Israel/UAE and among your customers?

Our partnership has been warmly received in the region, with several leading Middle Eastern media outlets publishing articles about the deal. Both countries are obsessed with dates and date products, and a partnership like this is truly unprecedented in our industry, particularly since the countries had no diplomatic relations until mid-2020.

Where do you see the business going in the next 5 years?

We’ve never been more optimistic about the future of D’vash Organics. With the deal in place, we will now be able to offer an extremely wide variety of date products at the most competitive prices in the world. We just launched a few new lines of products, including date snack bars, chocolate-enrobed date bites, and bags of whole dates. These new products are launching soon at major US retailers, including Whole Foods Market and CVS. Our partnership with Al-Barakah will help us roll these new products out and provide a pipeline of new date products that we’ll be able to launch in the near future.

We are also testing our date syrup in three different Costco regions, which – if successful – has the potential to increase our date syrup business by several orders of magnitude. We just launched our products in Canada and are in talks to sell to several other countries as well. Between the deal with Al Barakah, the new products, the sales growth we’ve seen for our existing product lines, and the international expansion, we’re confident that we’ll be the world’s first date super brand within the next five years.