Peace in a Bottle: SodaStream fuels a model of coexistence

As we enter the premises, a large welcome sign overhead deftly sets the tone: “Welcome to the Island of Peace”. A few steps in, another one – “Make soda not war” – makes it abundantly clear that you’re visiting no ordinary corporate headquarters.

We’re at SodaStream’s new 86,000-square-meter factory in the heart of Israel’s Negev desert. Located near the Bedouin village of Rahat, 22 kms from the Gaza border, the factory serves as a model of possibilities. Over 2000 employees – representing every race, religion and culture of this historically divisive country – work in harmony here, a place that has become synonymous with inclusiveness, equal opportunity and “economic peace”. Along the way, SodaStream and its visionary CEO Daniel Birnbaum are demonstrating that, when values drive success, the power of business can extend way beyond shareholder value and profitability. 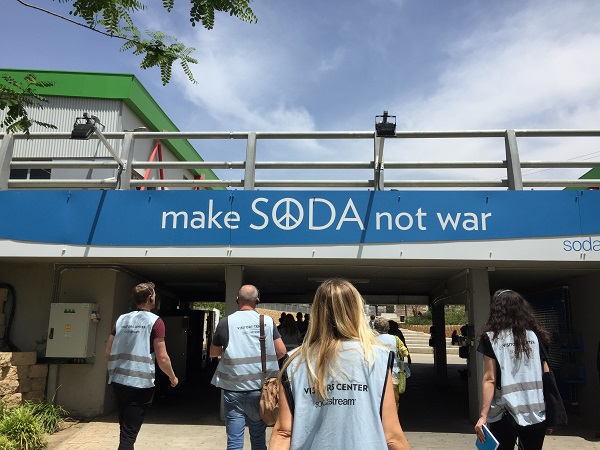 Though they’re doing pretty well in that department too, thank you very much. SodaStream launched way back in 1903. After some ups and downs, it re-emerged in a big way a few years back – thanks in large part to Birnbaum. Today SodaStream (NASDAQ: SODA) is one of Israel’s most compelling success stories, pulling in over $700 million in sales, with over 50 million products sold in 46 countries (its fourth largest market is Canada). Most recently, it was purchased by PepsiCo for $3.2 billion, a coup that only upped its allure at home and around the world.

At its most basic, SodaStream makes a darn good product, a sparking water maker for the growing number of folks craving soda but yearning for healthier options (the factory just surpassed two million bottles). The company also offers a convenient, cost-effective way to cut back on plastic waste. Keep in mind that one billion plastic bottles are created every day across the globe. And, as Birnbaum explains, attempts to recycle are proving futile. “Our energy needs to be on reduction.”

[To hear more about SodaStream’s environmental impact, listen to this podcast with Rena Nickerson, GM of Canada].

But SodaStream is pioneering another innovation too: coexistence. And it’s finding much love as the purveyor of peace, its model heralded by politicians, experts and corporate leaders alike. To wit: for the past three years SodaStream has been hosting the biggest Ramadan Iftar event in Israel, bringing together employees, religious leaders and politicians for food, prayer and performances by Jewish and Muslim artists. 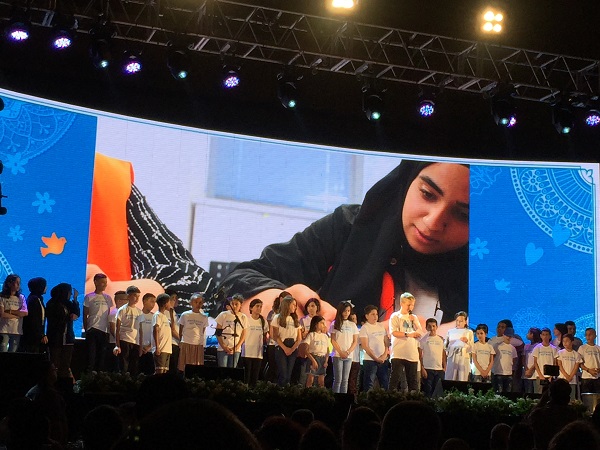 This year the former mayor of Rahat welcomed the 3000 guests and reserved these warm words for Birnbaum: “You’re an example for all of Israel.” The U.S. Ambassador to Israel, David Friedman, echoed his sentiments. “If I could package all this, my job would be very easy; this is the real peace,” he said. “We need to take what we have here and multiply it by 10; it’s a great model.”

Ironically, “peace broker” wasn’t even a moniker Birnbaum was looking for when he took over the helm of the company 12 years ago. But, as many social entrepreneurs know well, sometimes the mission finds you. “Just like penicillin was discovered by mistake, our formula for economic piece was too,” he says. It comes down to equal pay, equal benefits, equal opportunity and respect, Birnbaum explains. “That’s when the magic happens.”

That magic can be felt across the board. The factory houses a synagogue and four Muslim prayer rooms. It’s the only company in the country to mark its products with an Israeli stamp and the words: “This product is produced by Jews and Arabs working side by side in peace and harmony”.

When they moved the factory from the west bank to its current location in the Negev, many of the Palestinian workers couldn’t keep their jobs as they lacked work permits to enter Israel. Not deterred, Birnbaum spent over a year traversing bureaucratic entanglements to secure documentation for many. Today the factory employs 120 Palestinians. Like Nabil who’s been traveling to SodaStream from his home in Ramalah for the past eight years. “This is 5-star work,” he says, when asked how the job compares with opportunities in his hometown. Companies like SodaStream make him optimistic, despite it all, he adds. “I’m angry about the conflict, the situation, but we have to look to the future.” 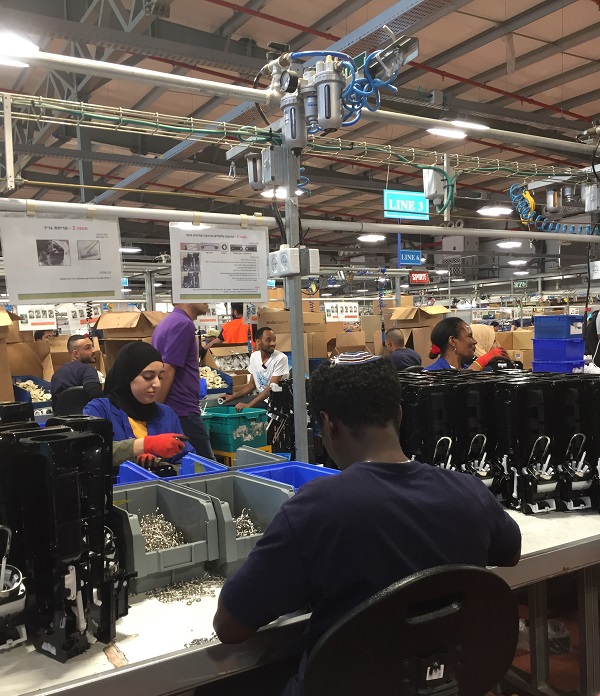 As we walk through the factory, another Palestinian greets us, offering his opinion on the value of coexistence. “We’ve been fighting year after year, let’s try a year of peace; if it doesn’t work, we can go back to fighting,” he says with a grin. “I’d vote for him,” retorts Birnbaum to the delight of coworkers nearby.

SodaStream’s inclusive policy also means 1000 new immigrants and 500 Bedouins, 200 of whom women, work here too. Bedouin communities in the Negev suffer from the largest rates of poverty and unemployment in Israel. But today they’re getting a boost. “I always felt I was strong but at SodaStream I feel even stronger; this is the place I was looking for,” shares Sara, a Bedouin line manager from Rahat. She originally worked at another company closer to Gaza but the level of respect and wages she receives here made the move a no-brainer.

When asked if she believes the company’s model of coexistence can be replicated outside the factory walls, Sara’s clear: “If you had leaders and managers like ours and people like us, then yes, it can,” she says, adding that she’s brought over a number of relatives to work by her side. “You can feel the difference SodaStream made in our community,” Sara adds, alluding to its impact on slashing unemployment.

Creating jobs for those who need it most is central to SodaStream’s vision, after all. It’s why Birnbaum made a commitment to introduce automation if, and only if, people don’t lose their jobs. Those replaced by machines are given another position in the factory’s six production lines. 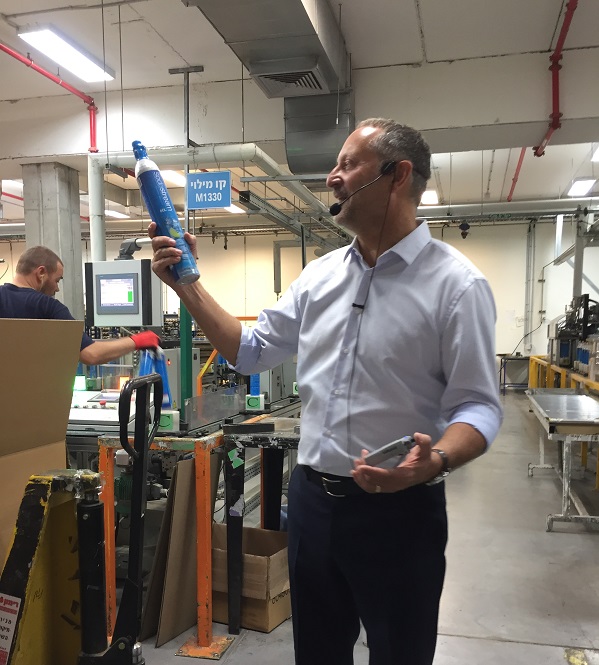 SodaStream CEO Daniel Birnbaum giving a tour of the factory

And it’s why they’re developing an assembly in the nearby Bedouin village of Kuseife, where the unemployment rate of its 17000 residents sits at 30% and a staggering 50% for women. The line will be set up at the community center to ensure women can more effectively balance work with traditional duties. This September SodaStream is also launching a bilingual (Hebrew and Arabic) daycare center as part of their ongoing efforts to break down barriers for local women to work and support their families.

What’s more, this year the company opened an assembly line at a local prison, providing prisoners with opportunities to earn wages and learn new skills to help overcome one of the largest challenges post-incarceration: jobs. In fact, SodaStream has already hired a few of the formerly incarcerated prisoners who worked on the prison line, into their own factory. “Our main goal is rehabilitation” explains our guide at the Elah Prison, a modern facility with a bright exterior that houses 14,500 prisoners, a mix of terrorists, drug dealers and others convicts, all of whom have only seven or less years to serve. “So they can go back to society as better citizens and have jobs.”

Pesach, a former prisoner who served time for drug offences has been drug-free for five years and working at SodaStream for the last year and a half, most recently as a line manager. The family he’s found at the company is special, he says, adding that he’s always trying to recruit other formerly incarcerated, hoping he can help get them the same opportunity. “People don’t believe how I’ve changed since coming here.”

Coexistence may not have been part of the foundational vision of SodaStream but today it serves as one of its strongest differentiators. Evidently, innovation is imperative not only to the products SodaStream develops but to the culture it adopts. It comes down to creating opportunities. Opportunities for inclusion, for growth, for jobs – for hope. As Birnbaum explains, “Where there is prosperity there can be peace.”

Elisa Birnbaum is the publisher & editor-in-chief of SEE Change, and the host of its podcast. She’s also the author of the recently published book, In the Business of Change: how social entrepreneurs are disrupting business as usual