Ve’ahavta, with the support of CIBC and several philanthropists, including Henry Wolfond – CEO of Bayshore Capital – launched an initiative to help provide emergency resources and support during COVID-19 to Toronto’s street homeless population.

Credit cards are being given out nightly through Ve’ahavta’s outreach van program; providing individuals with much-needed funds to purchase food and other essentials. The van operates daily, providing hot meals, clothing, sleeping bags, harm reduction supplies, and hygiene supplies to individuals experiencing homelessness while also providing referrals to community agencies in the city. Since mid-March, the outreach van has seen a 92% increase in service users.

On a walk in downtown Toronto in mid-April when everything was shut tight, Wolfond realized that life on the streets was now bleaker than ever, specifically for people experiencing homelessness who are sleeping outdoors during the pandemic. “As the COVID pandemic has changed the way we live and interact, it occurred to me that the homeless population in our city has been profoundly affected,” he says. “I found myself on numerous occasions not having cash in my pocket to give to people in need and realized that many stores were not accepting cash. I thought that prepaid credit cards could be a good way to provide some relief during this difficult time.” 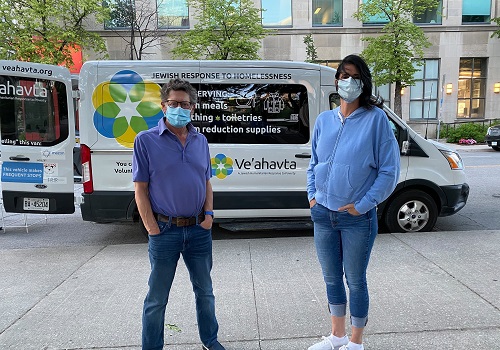 Wolfond’s idea was to seed a special program that would purchase pre-paid cash cards for the homeless through the van program to purchase food and other essentials. He and his wife Rochelle began with a personal donation of $5,000. Wolfond then approached CIBC and it agreed to contribute $25,000 to match any donations raised. He also approached friends and asked them to consider making a donation towards this cause. To date Wolfond has raised in excess of $67,000.

Before the spread of COVID-19, on any given night, there were 8,715 people experiencing homelessness in Toronto and of those, 533 were sleeping outdoors. The shelter system in Toronto had approximately 7,100 beds available with an average nightly occupancy rate of over 95%. Those sleeping outdoors relied upon drop-in centers, coffee shops, libraries, and shopping centres to warm up, use bathrooms, get food, and access WiFi technology.

During the pandemic, to increase social distancing, shelters began to decrease the number of beds in each shelter. Although additional spaces have been created, there remains a net loss of shelter beds in the city, and capacity sits today at 6800 beds. By April, the number of those sleeping outdoors tripled and has continued to increase as individuals choose to avoid the COVID specific dangers posed by the shelters, opting to live outdoors instead.

With the closure of public spaces like libraries, community centers, safe injection sites, food courts, and coffee shops, street homeless individuals have found themselves without access to formal and informal supports needed to survive. As well, the reduction in foot traffic on city streets has reduced their ability to panhandle leaving them with little to no ability to meet their basic needs.

“The immediate access to funds means that individuals who have been suffering the most during the pandemic can now purchase the things they need to survive,” explains Ve’ahavta’s executive director, Cari Kozierok. “Just knowing that people in the community care enough to take this step has a real impact on people who often say that they feel forgotten by society”.

Credit cards will continue to be distributed from the mobile outreach van on its regular route through Downtown Toronto in the evenings.