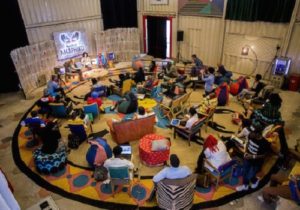 Red Bull Amaphiko, a global program supporting social entrepreneurs has arrived in the U.S. Launched by energy drink company Red Bull, the mission of Amaphiko – which translates into “wings” in the South African language of Zulu – is to support, to give wings (“Red Bull gives you wings!”) to people creating solutions and positive impact within their communities.

The first U.S. stop for Red Bull Amaphiko is Baltimore, Maryland, a city with its own unique challenges as well as a formidable reputation as a leading social impact hub. In fact, Impact Hub Baltimore played an integral role in getting Amaphiko off the ground in the city. The program’s primary platform is the Academy, which begins with a 10-day residency program that brings together hand-selected social entrepreneurs to connect and collaborate with some of the world’s leading innovators, entrepreneurs and storytellers. The 10-day residency is followed by an 18-month individually tailored development program that further helps the social entrepreneurs bring their ideas to life. Participants from across the U.S. will be eligible.

SEE Change spoke with Michelle Geiss, co-founder & executive director at Impact Hub Baltimore to learn more about the program, its history around the world and what social entrepreneurs can expect if they are selected to join.

What inspired the launch of Red Bull Amaphiko?

“So often people who are on the front lines of social change are overlooked, under-resourced, or taken for granted. We are excited to put these pioneers and their visionary ideas on a global stage.” 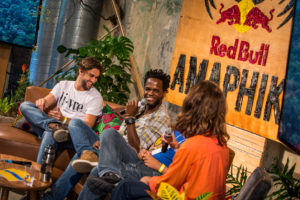 What’s the status of the project across the globe?

Since 2014, Red Bull Amaphiko Academies have taken place three times – twice in South Africa and once in Brazil – and has supported more than 100 social impact ventures globally. In 2017, Academies are scheduled to take place in South Africa in May, in Brazil in June and the inaugural U.S. Academy will take place in August at Eubie Blake Cultural Center in the Mt. Vernon.

Why did you decide to focus on Baltimore, what are the unique challenges the city is facing and how do you feel you can help?

The decision to hold Red Bull’s first U.S. Amaphiko Academy in Baltimore, MD was based on the city’s emerging social impact community, which is a sign of the city’s resiliency and commitment to positive change. Baltimore is a city that faces complex challenges, but it is also home with a vibrant community of residents committed to making real and lasting change. This combination makes our city a true leader in social innovation.

“For a social entrepreneur, the issues that Baltimore faces in its schools, economy, housing, and transit are the driving force behind their work. The solutions developed here will be relevant to cities across the entire US.”

What’s unique about Red Bull Amaphiko’s process in selecting Academy participants is its commitment to specifically uplifting grassroots social entrepreneurs who are solving issues within their community.

The Red Bull Amaphiko Academy is a launch pad for grassroots social entrepreneurs who are making a positive difference in their respective communities. During the 10-day residential academy, participants will receive inspiration and mentorship, as well as the practical skills and tools needed to take their projects to the next level; after the academy, participants will work with a mentor one-on-one over the course of 18 months to develop a business, personal and strategic development plan that they will bring to life.

It will include 15-20 participants from across the U.S. Baltimore was selected as the host city because it continues its emergence as a leading social impact hub in the U.S. In just the past few years, Charm City has been the home to the Social Innovation Lab at John Hopkins University, the Front Lines of Innovation event in summer 2016, and Light City’s Social Innovation Conference. In addition, the local Baltimore chapter of Impact Hub continues to grow its presence by offering social innovators and entrepreneurs an inclusive, inspiring, and functional space to expand their social ideas.

Applications are now open until April 30 on the Red Bull Amaphiko website.