Seek Power, Seek Change: How social entrepreneurs can leverage their influence to make a difference

Whatever our brand of social change, our justice missions and our social ventures need us to show up with a clear-eyed understanding of our capacity (a power word) to leverage political and financial resources (a power phrase) to make things happen. We are each powerful, in our own way and in our own time.

As our adult lives and professional careers begin, it’s understandable to feel as though everyone has power but us. Everyone else (parents, professors, police, politicians, even parking lot attendants) seems to have an ordained measure of authority. No matter who we are and what we have accomplished, for our entire lives there’s always somebody more powerful, more grandly-titled, more financially well-off.

The only antidote is to find your own power. Whining about the authority or influence that we don’t have may be cathartic, and an accurate observation, but social progress is not served by wallowing in our victimhood. Likewise, to call ourselves virtuous because we are powerless is moronic—like boasting that we are frugal because we are poor.

As changemakers, empowerment and agency can’t possibly mean never using our power. That would be like going out to dinner and not eating. Or witnessing injustice and not acting. Social entrepreneurs avoid the trap of empowering everyone but themselves.

Early in our careers, change agents discover that power is dynamic, relative, interactive, evolving, elusive and personal. A thousand faults of history have fated us to live in a refracted world of one-sided, multi-faceted power relationships.

We may be scared of power for its own sake, but we trust ourselves to use it wisely. Change agents tilt their power towards peacemaking, social progress and inclusive economic opportunity. We marshal the power at our fingertips to create the world we want. Power is a tool, a means, a commodity, waiting to be applied to the problems that piss us off.

The first power of social entrepreneurship is the power to raise hell.

In most places and in many circumstances, the mere act of asking a question upsets the entrenched and annoys the complacent. Indeed, the heart of social entrepreneurship is the oft-quoted George Bernard Shaw line from Back to Methuselah: “You see things; and you say Why? But, I dream things that never were; and I say Why not?”

Social activists use the question marks in our heads to challenge the status quo. Over time, gadfly questions insinuate themselves into the mainstream. Unanswered questions hover like pesky bumble bees. Our progressive point of view may not sting (yet), but we should always refuse to buzz off.

You and I can’t do our social justice work without debunking, exposing, challenging, decrying the institutional rigidities that impede social progress. A posed question signifies that longstanding traditions and staid social norms are open to challenge—itself a heretical, disruptive and powerful social entrepreneurial idea.

Taking on the monumental stupidities – the false narratives, myths, canards, confusions, fictions, hypocrisies, folklore and urban legends – that enshrine the status quo is the fun part of social entrepreneurship. “There is something personally satisfying about being disagreeable by advancing the truth,” rejoices Canadian-born John Kenneth Galbraith, former presidential advisor and Harvard economics professor (and a superhero of mine).

Even if we don’t get called upon in a meeting (or, if we’re talked over), we can ask questions during intermissions, in hallways, in letters to the editor, on talk radio, on social media—everywhere. As it happens, the majority of people you meet aren’t mind readers, so it’s on us to speak our truth or ask a probing question. Before you know it, without even breaking a sweat, we’re questioning authority. It’s a form of street democracy. Anyone can do it.

Wherever the councils of government are closed; wherever elites hide in guarded country clubs; wherever class, race, status and financial wherewithal influence the courts; wherever economic opportunity is sparse; wherever justice is a distant dream: a lacerating question is like a searchlight shined on a cockroach. 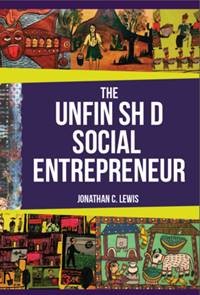 Jonathan C. Lewis is a life-long social justice activist and accomplished social entrepreneur. He is the founder of MCE Social Capital and the Opportunity Collaboration, and co-founder of Copia Global. He is a trustee of the Swift Foundation and general partner of Dev Equity.