In Canada today, 1 in 5 Canadians over 15 years old (or 22 per cent) report having a disability, and approximately 47 per cent of Canadians say they spend time with or help someone who is dealing with these difficulties. By 2036, nearly 9 million Canadians are predicted to be living with a disability. Yet every day in Canada, new buildings are constructed and pathways are created that throw up barriers to people with disabilities, preventing them from fully integrating into society. 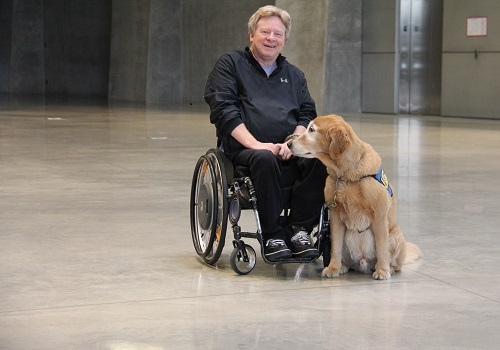 Brad McCannell, Vice President of Access and Inclusion at the Rick Hansen Foundation

When most of the public consider a person with a disability, they think of a wheelchair user or someone who is blind. But disability isn’t so easily defined – there are no clear-cut divisions or fixed degrees of disability. For example, two people with identical spinal cord injuries can have radically different physical abilities. Many people also have multiple disabilities, like someone who is hard of hearing and also using a walking aid – most older adults find themselves in this category eventually.

So it begs the question – what can we do to create public and private spaces that are welcoming to everyone, and easily accessed by people of all abilities and from all walks of life?

The federal government’s Accessible Canada Act (Bill C-81), received Royal Assent in June 2019, and the government is now in the process of developing accessibility policy standards and regulations ahead of its introduction. A key component of this legislation will shape the extent to which people with disabilities in Canada can interact with our built environment and are able to inclusively integrate into society.

With so much at stake, it is imperative that a framework is put in place that works for everyone. However, to truly create an inclusive-built environment, public and private collaboration is required to help deal with the root cause hampering real access– namely people’s attitude towards disability.

As it stands, the greatest barrier to accessibility is attitudinal (spearheaded by a lack of education on the topic). Buildings are being developed and operated without basic accessible features because there is a perception that accessibility is an added bonus, and only needed by a few people. But in reality, meaningful access should be an integral aspect of a building’s core design, allowing it to respond to the needs of everyone, regardless of ability.

There is also a perception that accessibility features are costly. This too has been proven unequivocally to not be the case – in fact, a recent report conducted by HCMA Architecture + Design in collaboration with the Rick Hansen Foundation, revealed that new buildings can achieve Rick Hansen Foundation Accessibility CertificationTM (RHFAC) at no additional cost to the developer through thoughtful planning and design.

Recent research from the Canadian Disability Studies Association cast doubt on the effectiveness of legislation alone to create change, revealing that people with disabilities in the United States (where accessibility legislation has been in place for over 30 years) had not, by itself, resulted in improved societal integration for people with disabilities. Legislation must work hand-in hand with public and private programs to achieve tangible results. With Canadian federal legislation on the way, we need to continue the momentum towards meaningful accessibility with complementary programs such as the RHFAC.

The Rick Hansen Foundation Accessibility Certification™ program (RHFAC) is a good example of how non-governmental programs can, and should, complement new and existing legislation and building codes. Though new federal regulations will set the benchmark for accessibility policy for federally regulated entities, provincial regulations and local codes will still vary region by region. RHFAC provides the industry with a tool that creates consistent language and methodology nationally to rate the level of meaningful access provided at any given building.

For the greatest outcomes, it’s essential that new legislation is accompanied by programs targeted at changing attitudinal and systemic barriers. The industry needs to be educated and incentivized, not simply penalized, to ensure meaningful access in our built environment that supports the entire community of people with disabilities. There must be an understanding that operators should not incorporate accessibility features just because they have to, but because it is fundamental to an inclusive society.

The implications of an inclusive society are staggering: according to a 2018 Conference Board of Canada report, improvements to workplace access would allow over half a million Canadians with disabilities to work more, increasing GDP by $16.8 billion by 2030. When Canadians can get in the door, they can be part of the economic engine, instead of being forced to be part of the load.

With so much to be gained both from a societal and economic perspective, the government, public sector and private sector need to work collaboratively to create an accessible built environment. Only then can we begin to tear down the barriers and create the Canada that we all want and deserve.

Brad McCannell is the Vice President of Access and Inclusion at the Rick Hansen Foundation. Brad’s expertise in the area of disability comes from both personal experience and practical knowledge. In 1992, he formed Canadian Barrier Free Design Inc. to fill the gap between the building code requirements and the real needs of people with disabilities.

As a leader in the field of accessibility for the past 25 years, Brad has extensive experience in the application of universal design across the built environment, providing accessibility consultations for buildings and organizations including Rogers Arena, Richmond Olympic Oval, Vancouver International Airport, University of British Columbia, and various Olympic and Paralympic Games.