In 2000, Winnipeg’s Inner City, particularly the North End, was a community in crisis. It was exhibiting the severe effects of poverty. The unemployment rate in the inner city neighbourhood, at 16.8%, had increased to a point that was more than triple the average unemployment rate in the rest of the city. Houses were boarded up as they became uninhabitable, and many commercial properties along the main streets had been vacated. Boarded up properties, both residential and commercial, became targets for arson. Parts of the community appeared like a ghost town and the area was prone to violence as gangs established their turf. Crime flourished and Winnipeg earned the reputation as the murder capital of Canada. Many residents, both in the inner city and elsewhere, lived in fear.

It was in this context that in 2002, Inner City Renovation (ICR), a social enterprise, started up as part of a poverty alleviation strategy. It took a holistic approach, addressing both housing needs and employment creation. Over the next ten years, ICR had significant impact on people, poor and wealthy alike, as well as on the local community and on a broader scale. 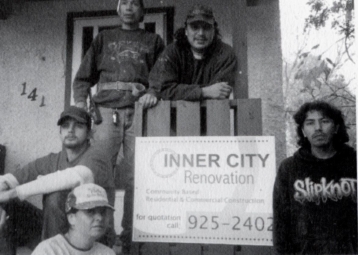 ICR created employment opportunities for local residents, most of whom had been previously unemployed and/or on social assistance. More than 40 full-time year-round jobs were created, jobs that provided average or better sector wages, health benefit plans, training, opportunity for advancement, a participatory culture and social supports.

In its first ten years, ICR paid more than $ 4.5 million in wages and benefits to its employees, who for the most part, remained in the community. It also provided formal training as part of the Provincial Apprenticeship Board training, and informal on-the-job training. 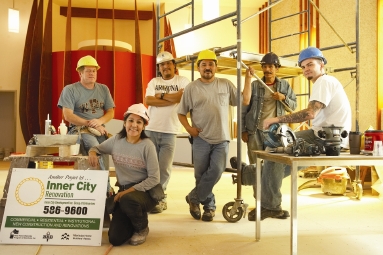 Employees were supported during their transition to full employment with both in-house social support workers and social activities. The employees gained respect and dignity, as well as a sense of accomplishment resulting from their completed renovation work. Together, they had a major impact on community infrastructure renewal, renovating more than 100 houses in the inner city – most of which had been boarded up and were unusable. In addition, ICR built more than 20 new houses on empty lots as part of the city housing infill program. These were all part of nonprofit community development organizations providing social housing.

ICR also had a major impact on commercial renewal along Selkirk Avenue, renovating more than ten boarded up properties and providing new educational training facilities, health centres, employment centres, and a host of other facilities for community organizations. 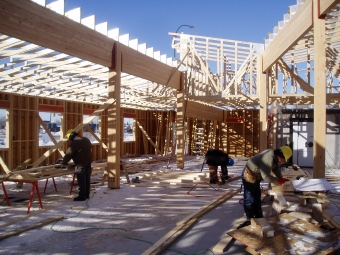 The renewal of derelict properties in the inner city had a direct impact on safety in the community. It reduced arson as the easy targets of boarded up properties were removed. More importantly, residents started to take pride in their community. As property values started to rise, homeowners started to make improvements to their homes. It felt safer to walk around when streets had shops with windows instead of plywood covering up storefronts. Safety audits conducted by various community organizations confirmed that there was a significant change in residents’ perception of safety.

Employment creation also contributed to increased safety in the community as unemployed people, as well as gang members and individuals coming out of prison had opportunities for employment, allowing them to turn their lives around.

The ripple effect of social enterprise

The impacts of a social enterprise like ICR go much further than the local community. ICR employees are contributing to government revenue rather than being a burden to it. Employees are paying personal income tax as well as PST and GST on their purchases. Previously, many of these employees had been a drain on government revenue through social assistance, policing, and incarceration expenses. For example, a single person previously incarcerated at a cost of $100,000 per year and now working at ICR earning $22,000 and paying various taxes has a net positive impact of $106,896 on government finances.

At the local level, there are considerable positive financial impacts related to increased property taxes and reduced policing and fire-related expenses as a result of renovations to derelict properties. There are also broader societal impacts related to poverty alleviation and relations between Aboriginal and non-Aboriginal people. 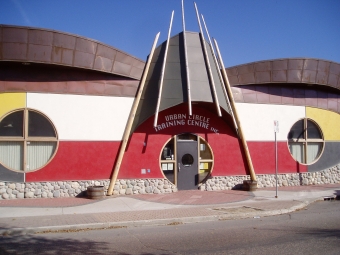 Richard Wilkinson and Kate Pickett in their book, The Spirit Level: Why Equality is Better for Everyone, point out that based on empirical research, a more equal community – along with its improved health, better housing, less violence, reduced crime, lower incarceration rates, lower teenage pregnancies, and sense of well-being – affects everyone in the community, not just the disadvantaged.

Although the impacts attributed to ICR represent just a very small percentage of the impacts of all of the social enterprises in Winnipeg and across Canada, their work has direct implications for a city like Winnipeg, with its inequality between Aboriginal and non-Aboriginal population. ICR’s role in the community provides an example of labour relations leading to better understanding and improving the relationship between Aboriginal and non-Aboriginal communities. ICR recognizes that Aboriginal people will play a major role in the future workforce in the city.

Marty Donkervoort is the founder and former General Manager of ICR. He is writing a book, entitled The Impacts of Inner City Renovation: A social enterprise in the North End of Winnipeg, and currently teaches a course on social enterprise in the Faculty of Business and Economics at the University of Winnipeg. He blogs at Changing Lives, Changing Communities, Changing Business.