SodaStream Canada Takes Another Step in its Fight vs Plastic

As part of its continuing fight against single-use plastics, SodaStream opened its first Canadian refilling station last week. The new high-tech 18,500-square-foot facility in Mississauga will enable the company to eliminate over 200 annual trips between Toronto and New Jersey, where the refilling process took place until now for its Canadian operations, reducing travel by 156,000 km. 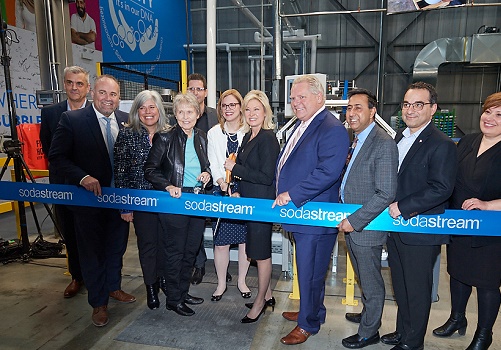 Ribbon-cutting at the new SodaStream refilling station in Ontario, Canada

It will also mean up to 28 new jobs. And that’s good news for the local region and Ontario, said the provincial premier Doug Ford at the opening ceremony. His sentiments were echoed by the mayor of Mississauga, Bonnie Crombie, who also remarked on the company’s unique culture and ethos, one that she witnessed upon a recent visit to the factory of the Israeli-based company. Dubbed the “island of peace” for its ability to bring together Jews and Arabs, working side by side, the factory was an eye-opener. “It had a great impact on me,” said Crombie.

To be sure, the story of SodaSteam serves as a testament to the power of business to move the needle in the face of obstacles that stand in its way. As Galit Baram, the Consul General to Israel, stated, “The government is limited in what it can do but the business community can bridge relations and help build cooperation.”

It’s a reality that Rena Nickerson, GM of SodaStream Canada, sees a lot. It comes down to the company’s values, one focused on optimism and hope. “We are a company of dreamers,” she said, adding that she’s particularly taken by how strongly that dream has been embraced in Canada. In 2018, SodaStream Canada grew by almost 50 percent, making it the fourth largest country in the global SodaStream family, selling 1.5 million machines since 2010.

Apparently, Canadians drink an average of 810 glasses of the sparkling water per minute, which means SodaStream users in Canada replace up to 217 million disposable bottles and cans. That’s impact. “We are thrilled that Canadians have jumped on the SodaStream rocket that is allowing us to invest in a new facility and local jobs,” Nickerson stated. “Clearly, we all share a commitment to the environment and a reduction in single-use plastics.”

Dr. Roberta Bondar would agree. The Canadian astronaut was honoured for her environmental leadership at the opening event, a particularly auspicious tribute, coming as it did on the heels of International Women’s Day. To mark the occasion, SodaStream created limited edition “She Changed the World” bottles which highlight the achievements of iconic female trailblazers including Bondar (those bottles will be given away on Instagram to individuals who share a video or their story about women who have inspired them using #sodastreamcanada #she).

“It’s an honour to have Dr. Roberta Bondar here to celebrate this milestone,” said Nickerson. “Dr. Bondar’s mission is closely aligned to ours to inspire Canadians to protect and care about the environment.”

The new refilling centre is an opportunity for SodaStream – recently purchased by PepsiCo – to continue to grow and focus on that sustainability mission. Other initiatives are in the works too. Over the next year, for example, SodaStream will be working with their retailer partners to remove the cardboard packaging that C02 Carbonators are often sold in, representing millions of boxes saved each year.

It’s an exciting time for the company as it continues to demonstrate its leadership in fighting plastic waste, a mission environmentalists like Bondar can certainly get behind. “It’s not about the end of the journey but how you get there,” she said. “It’s how we inspire people by our actions.”