Last week an impressive group of young future leaders descended upon Canada’s capital to take part in the third annual Youth Innovation Summit. Hosted by the United Nations Association in Canada (UNA-Canada), the British Council in Canada and the British High Commission, the Summit brought 12 young Canadians together – participants of the Active Citizens training programme – to pitch their ideas for social change in their communities and beyond. 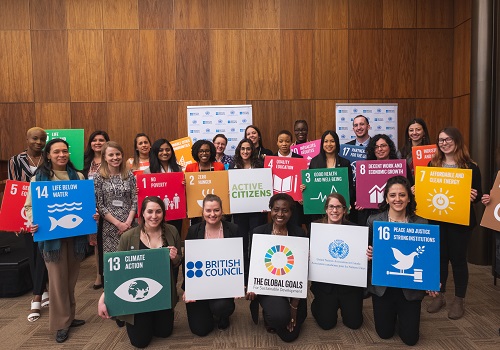 Since the launch of Active Citizens in 2009, the programme and its toolkit have been used in 68 countries with the help of 900 partner organizations, training over 250,000 Active Citizens who have designed and implemented a whopping 9000 social action projects worldwide.

Active Citizens is a leading programme for British Council globally,” said Mariya Afzal, Country Director at the British Council in Canada at the top of the Summit. With over 70 million people unemployed and 160 million living in poverty, the programme is vital. “Initiatives like this will help young people find new pathways.” Social innovation is very important to SDGs, she added, as it allows one to think outside the box or, “rather pretend there’s no box, no limitations,” she said. “It also connects people globally, who help tackle challenges.”

In 2016, Active Citizens came to Canada. In a few short years 370 young leaders have already benefited from its program, through training and workshops in Vancouver, Calgary, Toronto, Ottawa, Montreal, Halifax, St John’s, Winnipeg and Edmonton. Selected individuals from those groups are chosen to attend the Youth Innovation Summit. It’s become a priority in Canada, Afzal explained. “We believe that it is very important to provide youth the platform and opportunities to engage with their peers, working together for social impact, exploring alternative pathways for social innovation.”

It’s been an incredible partnership, added Afzal of the three organizations coming together to train these young people in Canada for a programme that is still growing across the country. Kate White, President and CEO of UNA-Canada would agree. The United Nations Association in Canada brings the sustainable goals “chapeau” to the conversation, she proudly explained to the Summit participants. “Eliminating poverty is at their core but they’re also a guidepost as to how to do this and how to get there.”

Her words were echoed by Susan le Jeune, British High Commissioner to Canada. “It’s not about how many dollars you make and put in the bank at the end of the day,” she said. “We too often define success by big cars and houses, but success is about doing things that really matter and help make the world a better place.” She continued with words of encouragement for the young leaders. “What you’re doing is admirable,” she said of their initiatives that stand in contrast to the image many have of young people today. “There are far more young people committed and engaged and doing right things for the right reasons.”

And the Winner is…

After the 12 participants pitched their ideas, the judges deliberated. It was a tough decision considering the fantastic group of initiatives at play, designed to tackle such diverse issues as poverty, inequality, climate change and unemployment. In the end, the top prize, the Youth Innovation Award – with a check of $4000 – was awarded to Zaffia Laplante and her clean-tech startup Hempergy. Based in Waterloo, Ontario, Hempergy is a social enterprise with a mission of tackling the housing crisis and promoting economic development in indigenous communities with the use of upcycled materials from hemp and cannabis. 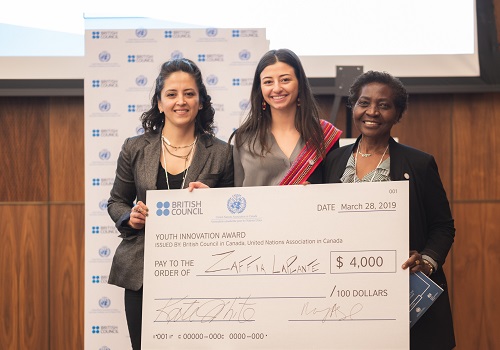 For Laplante, a 22-year-old member of the Metis Nation of Ontario, the idea for her social action project took root in her grandmother’s garden in North Bay, a place she adored as a child. It was there that she witnessed 500 tomato plants, cucumbers, peppers and other produce come to life. “I thought that was normal,” she said. University was an eye-opener, though, when she learned that no one even plants one tomato plant.

Then a couple of years ago Laplante heard about the legalization of cannabis and was concerned about the waste that would result. That passion for sustainability would soon meld into another: her indigenous culture and heritage. “I started finding out more about my culture and the widespread housing, water and food security crises taking place in many communities,” she explained. The question became: “Is it possible for hemp and cannabis to be used for some of the housing and infrastructure issues across Canada?

After months of research, Laplante soon learned that hemp waste can be made into natural insulation materials to improve heating and energy efficiency for buildings and homes. No doubt, she was onto something. Something that the judges at the Youth Innovation Summit were keen to support – and for good reason.

The Wilfred Laurier student, in the last year of Global Studies, is currently establishing partnerships and figuring out the way forward. Though focused first on construction materials, she’s also looking into how cannabis and hemp waste can be used in the cosmetic and textile industries.

It’s not just about creating indigenous end users, though. Laplante’s vision goes deeper. A lot deeper. ‘I’m not just trying to develop a product to solve home and housing conditions, I’m actually trying to create a whole new economic development model for indigenous communities.” That vision has, as its foundation, the Truth and Reconciliation call to action #92.

“I’m looking at completely restoring the model of doing business, getting people employed across the entire supply chain, whether that’s manufacturing or construction or transportation,” she said. “So they’ll be engaged throughout the process and not just getting the house [built out of upcycled waste].”

Laplante is thankful for the Active Citizens programme and the networks, training and broad support it’s given her. “It’s been amazing to present on something that is so important to me as a human being and an indigenous woman and to share my voice and story with some amazing people in this industry.”

It was a lot of hard work, she adds, but the win has been incredibly validating. A sentiment that would make the organizers of Active Citizens proud.  Just ask Mariya Afzal. “I’m convinced that our work is making an impact,” she said. As for the future for Active Citizens, she’s clear on that too. “We need to work with partners from different sectors to do more in this area and to continue to provide young people with meaningful opportunities for engagement.”

Elisa Birnbaum is the publisher & editor of SEE Change and the host of its podcast. She’s also the author of In the Business of Change: How social entrepreneurs are disrupting business as usual.