Meat the Future, a new documentary by award-winning filmmaker Liz Marshall, brings audiences inside the world of Memphis Meats, an innovative startup producing an alternative to meat unlike others currently found on grocery store shelves. Memphis Meats raised $17 million in 2017 in a Series A funding round. And if their investors – including Bill Gates, Richard Branson and Cargill, the largest U.S. meat producer – have their say, the lab-grown “cell-based” product will prove the future of meat substitutes.

[Check out our Q&A with Liz Marshall. She shares her thoughts on the popularity of “clean meat”, the challenges facing Memphis Meats and how COVID-19 may have inspired an even greater interest in the meat substitute. ]

For many, the product could not make it to market soon enough. According to the United Nations’ Food and Agriculture Organization, livestock are responsible for about 14.5 percent of global greenhouse gas emissions (putting it on par or greater than the transport sector). Then there are the dangers of industrialized meat production, an issue that COVID-19 has further highlighted. Add the unethical treatment of animals raised for food and the prediction that meat consumption will double by 2050, and another meat alternative seems imperative. 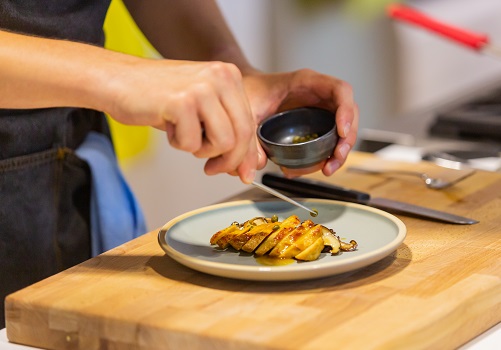 “Clean meat” or “cultivated meat” refers to the process of growing real meat from the cells of animals without having to kill any. Of course, lab-produced meat is not a unique process to Memphis Meats. Competitors include Mosa Meat, SuperMeat and Finless Foods, and the field continues to grow thanks to funding opportunities, pioneering visionaries and consumer demand.

At the heart of the film is company co-founder and CEO, Dr. Uma Valeti. He worked as a cardiologist at the Mayo Clinic at a time when stem cells were being introduced for heart patients (that’s where the “cultivated meat” idea originated). After practicing for 10 years, Valeti says he had no choice but to leave cardiology, move to San Francisco, and start this company, explaining that he could probably save 300 lives as a doctor but nothing comes close to the billions of lives he can impact with this venture. 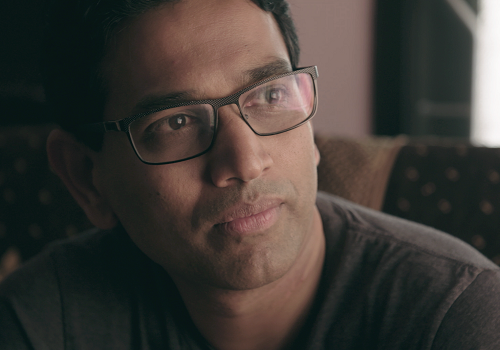 Valeti’s story is compelling not only from a professional standpoint but a personal one too. He relates how, at the age of 12, while still living in Vijayawada, India, he had an epiphany at a friend’s birthday party. While the celebration marked the front of the house, a different story was taking place at the back, where chickens were being slaughtered for the festivities. All those lives ending for the purpose of the party inspired in Valeti a desire to do different.

Valeti’s co-founder, stem cell biologist Nicholas Genovese, grew up on a family farm where his own passion for meat alternatives took shape. “As their guardian I sent them to slaughter,” he shares. “I realized this is a problem. I wanted to be a part of the solution”

Childhood inspirations aside, Valeti is clear on the practicalities of his venture: If demand for meat will double by 2050, there’s no way it can be met, he explains. “No method of production will satisfy the hunger for meat.”

To be clear, this is not about cloning animals, it’s about growing cells. Here’s how it works: cells are taken from cows, pigs, chickens, and fed with nutrients (similar to what animals typically receive). Antibiotics are not needed, as the process prevents bacteria from growing. Once the cells have grown, the meat is ready to be cooked and eaten.  The hope is to eventually eliminate animals completely from the process, say the founders, though it will still take a while to get there. 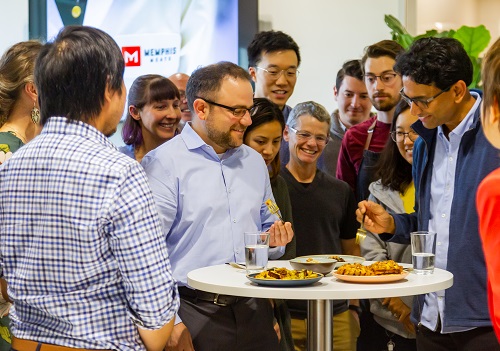 Taste test by Valeti and his Memphis Meats team

In 2016, Memphis Meats started to gain traction when they created the world’s first “cultured” meatball (at $18,000 per pound). A year later, they came out with the first “clean” chicken fillet and duck a l’orange (calling themselves the “world’s first clean poultry company”). With the meat industry, impact investors and conscious consumers watching closely, Memphis Meats is on a roll. But, like other “clean meat” ventures, they will have to tackle a few challenges before becoming financially sustainable.

One obvious obstacle is cost. Throughout the film, we watch as employees celebrate every drop in product price. But they’re still a long way from affordability. Another challenge is regulatory. With many in the beef industry pushing back at Memphis Meat’s right to use the term “meat”, we watch as company reps travel to Washington for meetings designed to clarify the regulatory framework, an issue that may see them dealing with both the USDA and FDA.

While acknowledging the obstacles, Valeti is focused on scale. It’s about being innovative in how food is produced, to do more with less, he explains. And his company is right on point. While 40 to 50 percent of land today is used to grow crops to feed animals, Memphis Meats requires a lot less – and takes four to six weeks to grow their product. Ultimately, the hope us to use 10 times less land, water and deforestation, significantly reducing the levels of carbon dioxide released into the atmosphere. That’s a big deal.

But Valeti’s vision is probably best encapsulated by his wife, Dr. Mrunalini Parvataneni. “When I think about the why of what we’re doing, it’s not a product. It’s about the way we want the future world to look. That’s what drives and motivates him every day.”

Meat the Future is screening as part of the Hot Docs Canadian International Documentary Festival which is being broadcast online due to COVID-19. The film is also available at CBC Gem.