The Past, Present and Future of Financial Inclusion: In Conversation with Elisabeth Rhyne

Elisabeth Rhyne recently stepped down as head of the Accion Center for Financial Inclusion (CFI), a position she held since its inception over ten years ago. CFI is an influential think tank in the financial inclusion space. The Impact Money Blog a friend of SEE Change, sat down with Ms. Ryhne to get her perspectives on the past, present and future of microfinance. And we are honored to share part of that interview here. 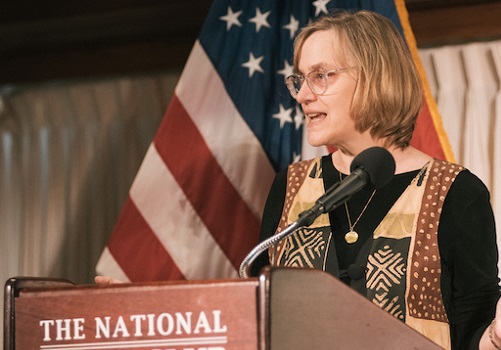 What was your moment of enlightenment? What sent you down this career path?

After finishing graduate school, some friends and I organized a Renaissance Weekend just among ourselves. We decided that the right approach was to ask yourself what was the biggest problem in the world that you can have a significant impact on, and then pursue it at full speed. So I decided to go for international economic development. My choice was shaped by an earlier experience at Action for Boston Community Development. Local economic development was embroiled in Boston’s ethnic rivalries: the Irish, the Italians, the African Americans were all at each other’s throats, and the organization itself was corrupt. I said to myself, if this is what domestic economic development looks like, get me out of here! With international development, I could take a more technocratic and less political approach, which worked better for me.

What did you set out to achieve at CFI when it started?

CFI is a think tank. When it began, the idea was to promote ideas and have an influence on the way the sector was evolving. Accion always had a policy department that published what we were learning. The problem was, in the atmosphere of the microfinance world at that time, there was enmity between the commercially-oriented group led by Accion, and the poverty oriented-group, led by Muhammad Yunus. The latter camp assumed we were pushing Accion’s hidden agenda and I was frustrated by that.

So, when we created CFI, we did it to encourage people to work together, not fight with each other, to work for the industry as a whole and to entertain all viewpoints. Our previous CEO, Michael Chu, pushed back on the formation of CFI as he felt Accion made most of its difference though its investments. While I agreed that real impact happens on the ground because of where the money goes, often that money is influenced and shaped by what people are thinking and what you say.

I remember that rivalry when I attended the Boulder Institute of Microfinance back in 2005. It seems silly in retrospect. I thought, ‘doesn’t microfinance need a big tent approach to alleviate poverty?’ But I was new to microfinance, so a bit naive.

There was a huge fight. In the late 1980s, Muhammad Yunus and his supporters lobbied Congress to have USAID focus only on the Grameen model of microfinance, which was all about serving the poorest of the poor and not allowing investors to reap any profits. Unfortunately, this group often failed to acknowledge the relevance of the other side. I remember hearing these absurd arguments about loans less than $300 were good and loans above this were bad.

Shouldn’t there be different approaches to solving the financial inclusion problem depending on the country context?

Yes, country context explains a lot of the differences in approach. Grameen was born in Bangladesh where labor is cheap and there are a lot of very poor people. Accion came out of Latin America where the banking systems are relatively more developed and where there are few people for whom a $300 loan made much sense. The income per capita there is several times that of Bangladesh.

When I first got involved in this sector, I was an advocate of commercialization. Microfinance institutions had to be financially self-sufficient and achieve huge scale. This was the ticket to achieving greater access and permanence. But by the early 2000s, when sustainability and scale had been widely accepted and even accomplished, it became clear that the next big threat was that the focus on profit generation was causing people to cut corners and not behave responsibly. At that point I switched my focus from pure commercialization to “let’s do what’s right for the customer.” I’ve stayed with that focus ever since. Those that are sympathetic to the industry need to hold it accountable, to do what is right for the customer and protect what is built from going too far. We used to talk about a double bottom line as if both bottom lines actually mattered. It seems with impact investing today, impact is a secondary concern.

What was your biggest accomplishment at CFI?

Definitely CFI’s biggest accomplishment is the Smart Campaign, which put consumer protection on the map of the industry. It was just after the global financial crisis of 2008-09 and the Andhra Pradesh crisis of 2010. People were thinking about protecting consumers, but they weren’t very organized about it. There was a lot of hand-wringing and flailing. Our accomplishment was to put a structure around consumer protection, which enabled people to focus on a common set of values. We put into practice the concepts and rolled it out across the sector.

Part of the backlash in Andhra Pradesh was against MFIs going public and the founders becoming millionaires. At the same time, I am disgusted by all the people who made millions selling sub-prime mortgages in the United States. Shouldn’t capital markets reward the do-gooders who are helping people escape poverty in a responsible manner?

I don’t care if social entrepreneurs get rich. The co-founders of Compartamos got rich and it was fine with me. The founders had to scrape together the relatively modest amount of money they invested in Compartamos, and they had no idea at the time it would one day go public. The issue is not that they got rich. The question I have is, what are the interest rates that they are charging? They always justified high rates by saying they needed to generate high profits to enable rapid growth. That justification wore off, though, once they, and the microfinance market in Mexico, got big. The focus should be on the quality of the product that people are getting. Accion pursued a demonstration effect model whereby profitability attracted new entrants, and that was good because it enabled more poor people to get access to financial services. However, in my view there aren’t enough checks on the quality of what’s being provided. The drive to scale and profitability deflects even impact-motivated investors from thinking deeply about what people are getting. Is it the right thing? Where is the reduction of interest rates that have been promised all this time with digitization? We don’t see it.

Technology is enabling microfinance institutions to lower their operating expenses, which in turn should enable them to lower their traditionally high interest rates (the Achilles heel of microfinance), but you’re right, we haven’t seen a lot of evidence of this.

I can’t say I’ve looked at the data to say for sure, but I think microfinance interest rates have been trending down over time, just very slowly. Fin-techs however are charging much higher interest rates than microfinance institutions because their models don’t have low default rates. Their models expect a high percentage of loans to become delinquent and written off. That’s not very responsible. You are going to burn through a lot of customers that way, and there will be negative consequences. Look at the Kenyan market. A Microsave report is coming out confirming that a quarter of the digital loan customers are going delinquent. A million people are black-listed in the credit bureaus for delinquent digital loans, and the vast majority of those are loans less than $10. The consequences for people are disproportionate to the size of these loans.

It is hard to make sweeping generalizations, but has the convergence between fin-tech and microfinance been a good thing?

I’m not sure it is a convergence. I wouldn’t call it that. Has it been positive? I can’t comment on the microfinance side of it, only the financial inclusion side. Where technology has succeeded dramatically is with basic banking accounts, payment systems, and reaching people that previously couldn’t have been reached. At first I thought: payments, really? That’s boring. It’s just how you pay for stuff. How is that going to change someone’s life? But what I realized is that digital payments have been the doorway to all kinds of important innovations.

I often wonder what role microfinance plays in the developing world. Is it a bridge to a more developed and inclusive banking sector or is there always going to be a role for microfinance institutions in certain countries?

Microfinance has had the biggest impact on countries that were poor and had the worst financial sectors, countries like Bolivia, Bangladesh and Cambodia. Bolivia’s financial sector was highly oriented toward serving the elite. Bangladesh’s banking system was state-owned, moribund and subsidized. Cambodia had to start from scratch. In all three, microfinance played a role in shaping the financial system. Bancosol now serves far more customers than any other commercial bank in the country, but in countries with more developed financial systems, microfinance plays more of a niche role. This is part of the reason why Mexico has such a strange microfinance market.

There are special issues related to reaching the low-income segment, so you will always need organizations focused on doing that well. Maybe in Kenya, you could say Equity Bank has played that role, maybe BRI in Indonesia, but I think microfinance institutions are still needed, and they still serve a lot of people. If they went away there would be a large gap.

I watched the documentary about Grameen in America when it came out, and what struck me is it seemed liked many of its customers were immigrants coming from countries where the Grameen model made sense.

That’s been true for Accion in the U.S. as well. Its customers were largely coming from immigrant Latino communities. If you look at the history of microfinance, I think you do see this role for it as a bridge. But what if you look to the future? Not that many countries still have that need. The whole development field is sort of an anachronism at this point. The differences between poor and rich are less than they used to be and are rapidly shifting. Why are we still doing international development? Within this sector we’ve succeeded so dramatically that we don’t have a job anymore. Or we have to turn to harder problems because access to financial services is no longer the key issue.

Is there an end game for microfinance? Will it eventually evolve itself out of existence? Wouldn’t it be a sign of success if traditional microfinance was no longer needed in most of the world?

As a movement? It has already moved away from being a movement to a very great degree. We do need microfinance. We don’t need the microfinance movement.

Distinguish the two for me

Microfinance institutions are playing a niche role in the financial systems of many countries, and it is a role that other players will not take on. They are doing it well and they need to keep doing it and keep growing. But microfinance as a movement was about spreading the know-how and providing subsidies to get things off the ground. That is what has now dissipated and is not needed as it was before.