The Power of Community: Social entrepreneurs are finding impact through engagement

This article is an excerpt from the book In the Business of Change: How Social Entrepreneurs are Disrupting Business as Usual written by Elisa Birnbaum. More on the book below.

If you’ve heard the adage “It takes a village,” you know there’s truth behind its timeless message. Whether rearing children, raising funds for a new communal playground or supporting the passing of a local bylaw, the chance of success accelerates big-time when people work together. This reality is especially true for social enterprises, whose impact is multiplied by community buy-in and engagement.

But there’s another piece here.

As we’ll soon see, many social entrepreneurs have adopted lessons from watching NGOs and other organizations work on the ground. One takeaway is the significance of working not only in a community but with it. Simply coming into a community, with external experts in tow, to set up initiatives but failing to ask for the input of locals — be it advice, resources or labor — or neglecting their unique local traditions, can seriously undermine long-term impact.

Another lesson they’ve learned is the importance of creating opportunities for empowerment and sustenance for the people they’re trying to help. Giving away free items without being mindful of the local marketplace or without any attempts at job creation can have the (often unintended) consequence of keeping local communities dependent on the organizations who’ve implemented some very well-meaning projects.

An increasing number of social entrepreneurs have used these learnings to deliberately set the stage for the business models and activities they create. If their aim is to find solutions to community challenges, doing what’s best for that community should be paramount, after all.

Meet Sasha Kramer, co-founder of Sustainable Organic Integrated Livelihoods (SOIL), committed to bringing better sanitation to Haiti. SOIL builds ecological sanitation systems in Haiti that safely transform household waste into rich, organic compost, with the understanding that sustainable sanitation practices can fight both waterborne illness and malnutrition. “We set up specialized composting toilets and have a plant where we treat waste and turn it into soil,” explains Kramer. To maintain SOIL’s work, people pay a monthly user fee for the toilets, and SOIL also sells compost.

From the very first days of SOIL, Kramer has insisted on keeping the focus and efforts localized. How? Let us count the ways. First, they source and purchase supplies locally and work as much as they can with local businesses and contractors to promote the country’s economy. Second, they train people locally so they can maintain the projects designed on their behalf. Third, they promote cultural fluency by having every staff member speak the local language of Haitian Creole to facilitate communication within communities. Fourth, in a spirit of inclusivity, every program they run involves consultation with local beneficiaries at every step. In this way, they can be sure that the project meets a real community need as opposed to their own perceived need.

What’s more, every SOIL project incorporates the goal of creating self-sustaining solutions for communities, of providing income-generating opportunities for them to become more financially self-reliant.

Dr. Jordan Kassalow founded VisionSpring in 2001 to ensure everyone in the developing world has access to eyeglasses, believing that a lack of affordable eyewear results in missed educational and employment opportunities and reduced quality of life. The origins of VisionSpring can be traced back to when, as a young student studying to be an eye doctor, Kassalow joined an organization that brought vision services to underserved populations in Latin America. In Mexico, the first patient he saw was a seven-year-old boy from the local school for the blind. 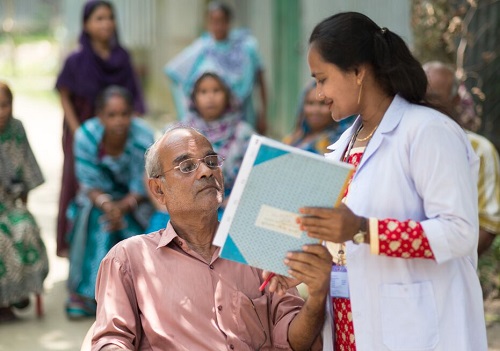 Except, as Kassalow soon came to realize, the boy wasn’t blind at all. He just needed powerful glasses. It was then that he recognized the injustice in the world, the fact that hundreds of millions of people could be helped with something as simple as a pair of eyeglasses — but weren’t. Since VisionSpring’s founding, over 3.9 million pairs of reading and prescription glasses have been sold to people in over 40 countries around the world. In 2017, they reached one million sold in Bangladesh alone.

To achieve its success, VisionSpring has adopted different models and distribution channels designed to sustain and empower each community with whom it engages. No matter where VisionSpring goes, those models — which take into account affordability, the provision of culturally appropriate glasses and the creation of entrepreneurial opportunities — are customized according to the local needs and demand.

In fact, it was Kassalow’s focus on community and local needs that inspired his decision to sell his glasses rather than donate recycled ones, an approach adopted by many others working in the developing world today, including the organization he worked with in Latin America that pivotal year. The robust system it had in place, whereby the teams collected and organized eyewear according to gender and prescription strength and handed out glasses accordingly, was meeting many needs, admits Kassalow. But he learned something significant from a 40-something woman from Columbia who had such poor eyesight that the village had anointed her the “blind woman.”

She canoed down the river to their eye clinic, eager to be fitted with a pair of glasses. Two days later, she returned, discouraged because people from her village were laughing at her 1950s cat-eye frames embedded with rhinestones. The pair simply didn’t suit the village and its customs, fashion or otherwise. Due to her unusual prescription, Kassalow couldn’t find any other pair that would meet her needs. So the woman left without any, preferring to be blind than ostracized.

“It was a real lesson,” he says. “It made me look internally at what we were doing wrong.” What he came to understand was that, by not treating this woman as a customer, they didn’t give her the dignity and care that one would typically receive. “The fact is that vanity is not monopolized by rich people, and cultural norms are important.”

Kassalow realized that if he charged for the glasses, instead of donating them, he would be held responsible for providing value. If customers didn’t see value in that offering, they simply wouldn’t buy them. “That would put an onus on us to create products that were, both from a style and pricing perspective, appropriate for the local context,” says Kassalow. “It made us better for what we were doing.”

Besides, when you run a revenue model, the opportunity for scale is much greater than a donation model. And with the problem so massive — 2.5 billion people in the world without proper eyeglasses — you need markets to make it work and help it scale enough to even come close to tackling the problem.

Elisa Birnbaum is the publisher & editor-in-chief of SEE Change Magazine and the host of its podcast. She’s also the author of In the Business of Change: How Social Entrepreneurs are Disrupting Business as Usual. Find out more about the book, and order your copy at your favorite bookstore or here.