Like many social entrepreneurs, Thorkil Sonne’s venture was borne of personal adversity. It began when he and his wife noticed their two and a half-year-old son, Lars, was different from other children, from whom he remained disconnected. An autism diagnosis would shock the couple to their core. “We realized new plans for our family had to be made,” Sonne related at a recent speaking engagement hosted by Ashoka Canada at McKinsey & Company’s Toronto headquarters.

Those new plans would address questions most parents never have to face: How will our son fit into this world, a place that regards the “differently-abled” with a mix of discomfort and trepidation? What will Lars do with his life? How will he support himself? What will happen when we’re no longer around to care for his needs?

The search for answers would prove invaluable not only for Ashoka Fellow, Sonne, but for a growing number of people worldwide. According to statistics, one percent of the world’s population – 68 million people – has Autism Spectrum Disorder. And that’s not taking into account those with other disorders on the autism spectrum, such as Attention Deficit Hyperactive Disorder (ADHD).

Many of those diagnosed are shunned from working environments, deemed odd, unmanageable. But Sonne knew they represented so much more. And he would prove it. First things first, eliminate the image of Dustin Hoffman’s Rain Man. “Only one third [of that character] was replicated from the true guy,” Sonne states emphatically. Second, keep in mind autistic individuals often embody highly particularized skills, including an eye for detail, pattern-matching and high tolerance for repetitive tasks.

Believing in their potential, Sonne re-mortgaged his home and established Specialisterne (“The Specialists”) to enable people with autism to put their specialized skills to use, thereby transforming their “handicap” into a competitive advantage. Thanks to his efforts, isolated segments of the population, typically relegated to life’s proverbial sidelines, can now enjoy opportunities as productive and inclusive segments of the labour market. 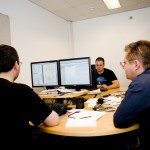 Specialisterne’s success stories speak for themselves (Harvard Business School uses Specialisterne as a case study of social enterprises). One individual, for example, was about to mark his 25th anniversary of being out of work, a “milestone” he never met, thanks to Sonne.

The organization is transformative in other ways too, shaking up, as it does, society‘s traditional perceptions. To wit: the term “specialist” is used instead of “autistic” or “people with disabilities,” which Sonne calls destructive. The approach explains Specialisterne’s logo, a dandelion. As Sonne explains, many view the plant as a weed, a nuisance to be eliminated. But, upon cultivation, the dandelion turns into an herb with beneficial healing qualities. How you choose to view the plant is entirely up to you.

The symbolism is profound; social entrepreneurship at its finest.

Sonne’s efforts aren’t going unnoticed. He was awarded the prestigious title of Ashoka Globalizer and, in 2009, The Atlantic Magazine called him one of 27 of the world’s Bravest Thinkers, along with Barack Obama and Steve Jobs.

Today, Specialisterne employs more than 50 consultants who work on tasks such as software testing, programming and data-entry for a range of companies, the majority of which are private IT companies, though the government is warming to the possibilities too. The company also offers assessments, training, and a three-year education program for young adults to help them acclimate to business settings.

Though it began as a for-profit social enterprise, hoping to garner partnerships across the world, Sonne decided to step down as CEO and donate the company’s shares to a newly formed nonprofit organization, the Specialist People Foundation. Sonne admits the business model led to some confusion early on, but as people become more comfortable with hybrid organizations, it’s gotten easier.

That’s not to say he doesn’t face challenges. “I sometimes feel there’s a risk in being too social for the corporate sector and too business-like for the social sector,” he says. “But I’ve given up trying to fit in,” he adds, explaining the Ashoka network helped him find other like-minded changemakers working in the “in-between.”

Finding like-minded folks has now become central to Sonne’s efforts, especially with Specialisterne’s goal of providing meaningful and productive jobs for one million people with autism and other invisible disorders. The mission may seem lofty but those who’ve met Thorkil Sonne know it’s only a matter of time. Partnerships already exist in Scotland, Ireland, Switzerland, Austria and Minnesota, and Sonne is fielding numerous other requests from people and organizations wanting to license the model.

Organizations like the Autism Calgary Association, run by people who Sonne calls soul mates. “We have the same ambition for our kids,” he explains. “We don’t want them to be helped out of pity, we believe they could make contributions to society, if only given a chance.” Currently in the feasibility stage of the licensing process, the hope is the Association will move forward – and motivate others to do the same.