When Collaboration Proves Difficult, These Steps May Help

When we work together it’s easy to make assumptions about someone being difficult. However, underneath these assumptions are often problems with the human system we’re a part of, which is what really needs to be addressed. I was involved in a failed attempt to collaborate that can be attributed, in part, to unresolved tensions between community leaders who were recruited to work together and conflicts within the consulting team.  What started off as a bold initiative that envisioned coalescing human, social, and financial capital for social innovators eventually fizzled out.

Although there was general agreement about the need for a more supportive ecosystem for social innovators, the participants couldn’t agree on the idea that was proposed by the group’s initiators.  It’s frustrating when people critique an idea you’re passionate about and have put considerable effort into developing.  However, healthy skeptics play an important role by helping us see situations from a different perspective, which enables us to improve upon our ideas and make better decisions.  Unfortunately, in this case, concerns about the potential for diversion of resources from local nonprofits to a new group and token engagement of disadvantaged community members were voiced, but were not resolved.

Conflicts within the consulting team added to the challenges of forming a new group and aligning participants around a shared goal.  Shortly after joining the project both consultants approached me separately about their challenges in getting along, which involved different work styles and lack of communication. Although I helped them resolve their differences the behaviors that led to the conflict stayed the same. I also found myself taking on more of the lead consultant’s responsibilities and became increasingly annoyed about doing his job in addition to my own. By focusing on our issues with each other, we failed to address the underlying problems that prevented us from working as a team. If we had taken the time early on to explicitly agree about how we would work together, consistently practiced open communication, and held each other accountable for following through on tasks, these problems could have been minimized or avoided.

Efforts to develop a supportive environment for social innovators might have continued had participants been supported in working together.  The initiators’ unwillingness to lead the group, at least until others were willing to step into a leadership role, affected everyone else’s willingness to participate.  Collaborative efforts were also stymied by their reluctance to help obtain funding and other resources the group needed to continue working together.  Part of the problem was that the initiators looked to the consultants to lead the collaborative for them.  However, the consultants’ role was to help them facilitate a process that would result in the group taking ownership of the initiative they were working on. 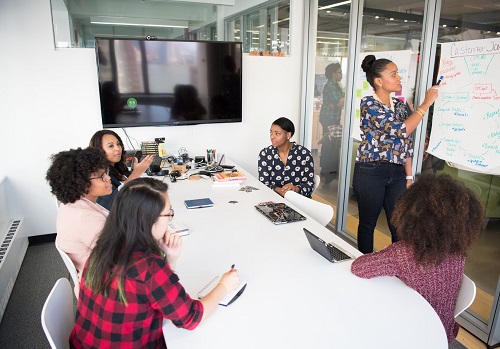 This short list of tips can help you deal with difficult collaborators:

1. Recruit the right mix of people

Instead of putting out an open invitation and hoping the right people will show up, identify and recruit for specific help the collaborative needs.  Broaden your group beyond issue experts to also include other expertise needed to achieve collective goals, like fundraising and people who are directly experiencing the problem to be solved.  Remember to include healthy skeptics in addition to advocates.  One thing everyone should have in common is being a team player.  In addition to having good interpersonal skills there should also be a willingness to be part of something that is greater than ourselves and make sacrifices for the common good.

This begins with being aware of differences in privilege among group members.  Consider structuring collaborative efforts to minimize the influence of more powerful members, such as “one member, one vote” decision making or increasing the representation of people from disadvantaged communities in governance structures.  Establish community agreements early on to set expectations about participation that include making space for people who are new to collaboration or have traditionally had less say in decisions that affect them to more actively participate.  Cultivate an inclusive culture in which people with lived experience of the problem directly participate in solving it instead of consulting with them to obtain buy-in for an existing solution.

Polarities, such as analyzing the causes of the problem versus taking action to address it, can create tensions when people with different agendas, perspectives, and ideas come together.  Instead of ignoring or avoiding tensions when they emerge, acknowledge that this is a common occurrence and help the group come up with solutions that work for everyone.  To address disagreements, as well as foster an environment of learning and development, use effective feedback practices (e.g., separate the person from the behavior and focus on the receiver’s goals).  A difficult conversations process can help resolve conflicts in which both sides work together to understand each other and come up with workable solutions.

Before people can work together they need to get to know and trust each other.  It’s not enough to bring people together and expect collaboration to happen on its own.  Developing relationships grounded in trust, mutual respect, and open communication make it easier to address miscommunication and misunderstanding before issues snowball.  Equally important is clearly communicating what is expected of participants and what support they can expect to receive from the group as a whole and each other.  Collaborative efforts typically need three types of support—logistical (e.g., organize meetings, set up a communications channel, send reminders), coordination (e.g., help people connect with each other, support the flow of information, and ensure enough value is generated for people to keep participating), and leadership (e.g., oversee the collaboration and decision making).

Collaboration is difficult, messy, and time consuming.  However, it’s our willingness to not only commit to the cause, but also to each other that offers us the greatest chance of building communities that are better places to live for everyone.

Kimberley Jutze is a social activist and founder of Shifting Patterns Consulting, a Certified B Corporation that helps changemaker leaders get their team members on the same page and put collaborative processes in place to achieve greater impact.  You can follow her on Twitter at @ShiftPatConsult and LinkedIn.