Why We Never Roast Outside of Coffee Growing Communities

After all the shouting there are just two types of coffee

We get asked all kinds of questions about ‘sustainability’, we’re frequently asked what’s ethical and what isn’t and, more often than not, we’re asked why we don’t just put a Fairtrade sticker on all our coffee bags and be done with it. We’re a UK social enterprise, registered with SEUK (the national body). We’re not the only coffee supply company that’s a social enterprise and we’re certainly not the only coffee company that claims their way of bringing coffee from farm to cup is ethical or sustainable or fair.

We are, however, the only UK social enterprise roasting exclusively in coffee producing communities. And we are probably the only coffee company anywhere that refuses to buy green beans of any type unless roasted at source, hence our name Not 1 Bean (we never roast outside of coffee producing communities). We’re based permanently in the coffee regions of Colombia, with offices in the UK and a distribution centre in France.

I don’t think anyone working within the coffee sector is unaware of the current dire situation on coffee fields around the globe. Prices are at a 15-year low, slavery conditions are regularly exposed, and child labour is widespread – all as a result of the pitiful amounts paid to producers. None of this is open to debate, nobody argues this isn’t the case. Blogs and social media are full to the brim with roasters, retailers, distributors and wholesalers all saying the same thing, namely that coffee right now is about as far from sustainable as it could possibly be. 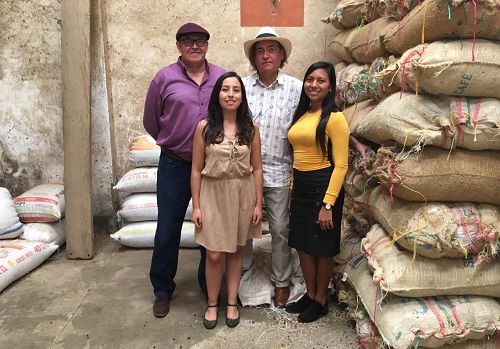 Gary Anthony Golden (in purple), CEO of Not 1 Bean

The debate, of course, rages around whose fault it all is. Here’s the conundrum, the one unavoidable truth: Whilst the farmer is removed from the supply chain before any value is derived, this will just get worse. And that value is, of course, only generated after roasting. That’s the one thing stopping coffee production becoming a sustainable business  – the very people shouting their ethical credentials loudest are the same ones contributing to these problems in the first place.

When we first started asking why more Colombian coffee wasn’t roasted at source, (back in 2010 when we arrived here), we were repeatedly given one reason: Coffee is only fresh when roasted in the consuming country. Which could have been more truthfully answered by saying, “That’s how we make our money.” But let me address this point.

If coffee is only at it’s freshest when roasted close to consumers or the supermarket shelf it’s going to sit on, then why do supermarket coffees have a best before date of up to two years in advance? If it’s not fresh after a two-day flight when roasted at source, then how is it still fresh for a year or two just because it was roasted locally to a supermarket?

The same applies to coffee shipped, rather than flown. The coffee is protected during transit, just as it is on the supermarket shelf, and a three-week journey is neither here nor there if it’s good for another 18 months to two years waiting to be purchased. In fact the biggest companies in the industry roast their coffees in one country and then fly or ship to countless others – what they don’t do is roast in the producing countries where the extra revenue and jobs would be invaluable.

The truth is that it’s the bottom line that matters.

Whether a Fairtrade, UTZ or any other certification system is in place, current methods are clearly not working. No one is saying these certification bodies don’t have a place, but right now at Not 1 Bean we’re paying $2.75 per kilo to roasters in Colombia. The extra 20c Fairtrade premium doesn’t exactly break the bank. What we really have to ask is why take this roasting income away in the first place? Feeding a fraction back then claiming ethical and sustainable practices doesn’t help anyone, certainly not the communities living in abject poverty as a result.

Here’s another point to think about, one that could be considered even more important than those above: Given that roasted coffee is up to 20 percent lighter in weight than un-roasted ‘green’ coffee, shouldn’t we be looking to roast before shipping and to fill as many containers as possible with this lighter cargo to get a few ships off the oceans? Actually 20 percent of the the worlds coffee cargo being taken off the seas is a colossal amount. We’re probably talking scores of cargo ships not polluting the atmosphere every year – who could object to that?

There are only two types of coffee anywhere in the world. The first type is roasted within the producing community, with the extra income and jobs staying there, helping to fight abject poverty, conditions analogous to modern day slavery, and the widespread use of child labour. The second type isn’t.

Gary Anthony Golden is the CEO of Not 1 Bean, a UK Ltd company and registered social enterprise that reinvests at least half of their net profits into their social mission (the farming communities). Not one coffee bean is ever roasted outside the coffee producing community (hence the name), meaning that far more money stays with those with the most to lose.

Gary has been living in Colombia since 2010. After travelling around the country and witnessing firsthand the abject poverty in the coffee fields, he set up Not 1 Bean to try and leave more of the income from coffee production within the communities themselves. Co- founder Mike Coates is based in the UK and they recently opened a distribution centre in Northern France.