Women’s Representation in the Tradition of Black Women Organizers

As a child of Southern parents, I grew up hearing stories about the Civil Rights Movement and, in particular, the trailblazing African American women throughout the arc of American history. These women organized their communities, sacrificed their time and resources, and made a difference in countless lives – all with the hopes of building a better America.

When I became the CEO of ReflectUS, the national Coalition of the nine leading women’s representation organizations, I knew I wanted to honor and carry on this legacy. Consequently, at the foundation of our national programming is a model of women’s leadership development that centers on women from directly impacted communities – the very women often called upon to do the work of community-building, yet often ignored when it comes to political leadership.

Women like Ella Baker, Fannie Lou Hamer, Diane Nash, and Dorothy Height inspire this focus. In addition to being leaders in the Civil Rights Movement, each of these women fought for women’s political leadership. These organizers, and many other women like them, demonstrate what is possible when women who would otherwise be silenced refuse to be ignored and instead rise to leadership positions.

Consider Ella Baker who modeled leading with the needs of directly impacted communities at the front and making their issues the primary concerns. In organizing diverse African American communities, she placed a high value on people-directed movements. Fannie Lou Hamer fought for women’s rights by organizing African American women, leading efforts to register voters, and driving voter turnout. She ran for the U.S. Senate and Mississippi State Senate – both incredibly dangerous and courageous acts for an African American woman at that time. Hamer proclaimed, “Nobody’s free unless everyone’s free” and used her talents to ensure greater diversity in her political party. 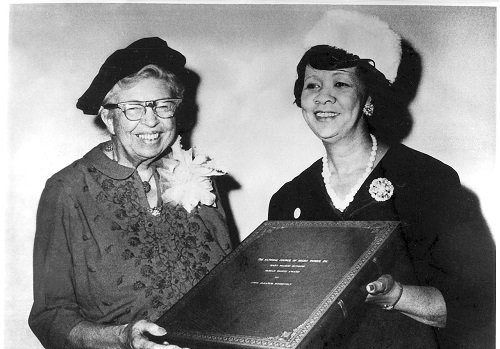 Diane Nash was so committed to organizing young people that she was convicted of contributing to the delinquency of a minor for teaching students non-violent protest strategies. She still advocates for fair housing in her hometown and demonstrates continued commitment to her community.

Dorothy Height began her career as a social worker and community activist and fought for the rights of African Americans and women. She is credited as one of the first to connect the struggles of women and African Americans and was one of the most recognized women in the Civil Rights Movement. She was on the frontlines of addressing gender discrimination within the movement. Height was consulted by two U.S. Presidents on political issues, and taught us that women’s voices are critical at all times in all spaces.

Their focus on leading with the most directly impacted is as important today as it was then. As a result of COVID-19, women face greater economic insecurity than ever before seen. The United States is experiencing the first “she-cession”, so named due to the number of women leaving the workforce and the stagnation of women’s financial gains. In fact, a recent report by UN Women and the United Nations Development Program shows that women’s poverty is expected to rise 9.1 percent and push 47 million more women and girls into extreme poverty as a result of the pandemic.

In the spirit of uplifting the voices of women from directly impacted communities, the ReflectUS “From the Ground Up” State Network powered by ReflectUS Coalition members, connects local women to national resources while working for systemic change to remove barriers to their political leadership. As we support women in their communities, we pay tribute to the African

American women who have been working for women’s representation in political leadership for generations. Through the State Network, the ReflectUS Coalition is partnering with local organizations, working with women who are already leaders in their communities. I believe that if we can create change for the women who are most ignored in our system, we will elevate all women across racial, geographic, and ideological spectrums.

Amanda Gorman’s poem “The Hill We Climb,” provides an inspiration for America. She beautifully said, “And yet, the dawn is ours before we knew it. Somehow we do it. Somehow we weathered and witnessed a nation that isn’t broken but simply unfinished.” Gorman spoke the words many of us have felt deep inside – there is hope; our story is not yet finished. As Ella Baker, Fannie Lou Hamer, Diane Nash, Dorothy Height, and countless other women remind us, we have the power to make history now.

ReflectUS wants to ensure that women, from the ground up, are empowered with access to resources and opportunities to seek political leadership. When we build inclusive movements, when we focus on the women who have been largely ignored in policymaking, we make history.

Tiffany Gardner is the CEO of ReflectUS. ReflectUS is a national, nonpartisan coalition working to increase the number of women in office and achieve equal representation across the racial, ideological, ethnic, and geographic spectrum.