On August 21, 2017, Ashoka Canada convened a room full of changemakers driven by their collective determination to equip young people with the skills they need to thrive in the 21st century. The event, hosted by Ryerson University, Canada’s first Changemaker Campus, marked the final selection panel stage of the Ashoka U Changemaker Campus designation process. The candidate schools vying for the designation are Universidad del Desarrollo from Chile, Georgian College from central Ontario, and Royal Roads University from British Columbia.

The evening kicked off with remarks by Barb Steele, Ashoka Canada’s executive director, who graciously opened the event with Ryerson’s unique land acknowledgement statement that invokes the Dish with One Spoon treaty. This treaty, originally formed between the Anishinaabe, Mississauga and Haudenosaunee nations, invites all peoples to share the responsibility of ensuring the dish is never empty, which includes taking care of the land and the creatures we share it with.

Ashoka U in Canada is made possible through the support of RBC Corporate Citizenship and Mark Beckles, senior director of youth strategy and innovation was on hand to get the evening off to a great start. He underscored RBC’s commitment to a 10-year strategy aimed at leveraging social entrepreneurship to change the world and create opportunities for Canadian youth to thrive. This work is needed now more than ever as just over half the world’s population is under the age of 30. 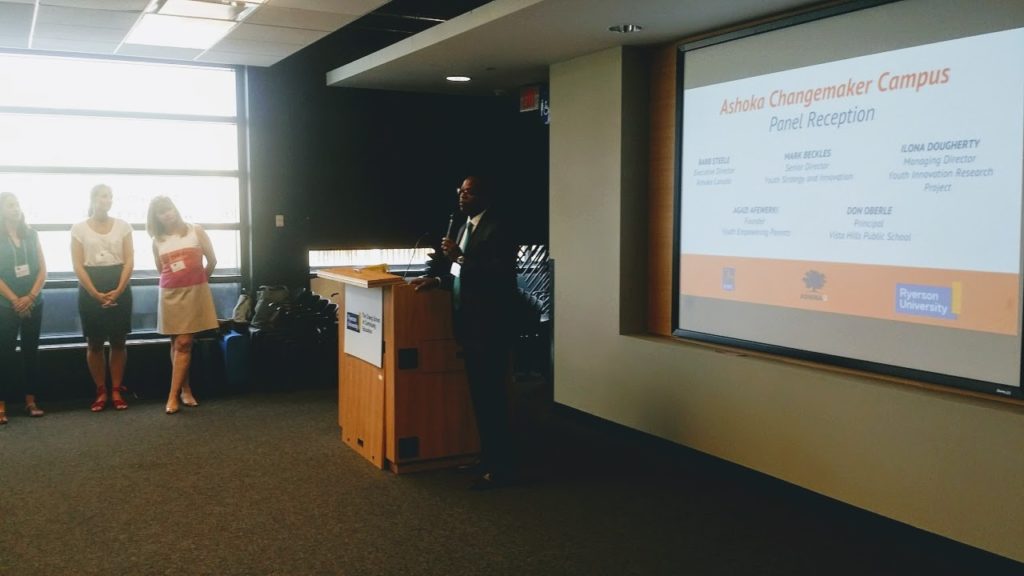 Overcoming barriers to harnessing the innovation of Canada’s youth may seem a daunting task, but research being conducted by Ashoka Fellow Ilona Dougherty and her team at the University of Waterloo’s Youth & Innovation Research Project, reveal something quite interesting. Youth between the ages 15 and 25, people are neurologically wired to be more creative, make better connections between concepts, and surface innovations more easily than those who are older. Scientists call this the “reminiscence bump”, because even as adults, we recall memories from this period of life more vividly than from any other period. These traits make young people society’s untapped engine of innovation.

Vista Hills Public School is the latest addition to Ashoka Canada’s K-12 Changemaker Schools network. Principal Don Oberle and his staff were on hand to describe their work with students to ensure that they have the foundational mindset that will enable them to unleash their inner innovators once they hit the Reminiscence Bump.

Agazi Afewerki attested to the latent resources that young people, especially those in underserved communities offer society. His organization, Youth Empowering Parents harnesses the language and technology skills of immigrant youth in order to teach these much needed skills to adults in their community. He told the room that working with Ashoka has made him realize that his organization’s name is something of a misnomer. “Although we are teaching parents,” Agazi said, “it is really the youth that are being empowered. Really what we’re doing is innovating in the youth leadership and youth volunteering landscape.”

This work in the educational system is central to Ashoka’s global mission of creating a world where every individual can be a powerful force for positive change. We therefore seek to support institutions whose missions align to that broader vision. Changemaker Campus candidates are nominated based on their track records for social innovation. Ashoka then does a rigorous 360 degree institution-wide scan, described by venture & partnerships director, Danica Straith, as “deep digging into every corner of the institution”. 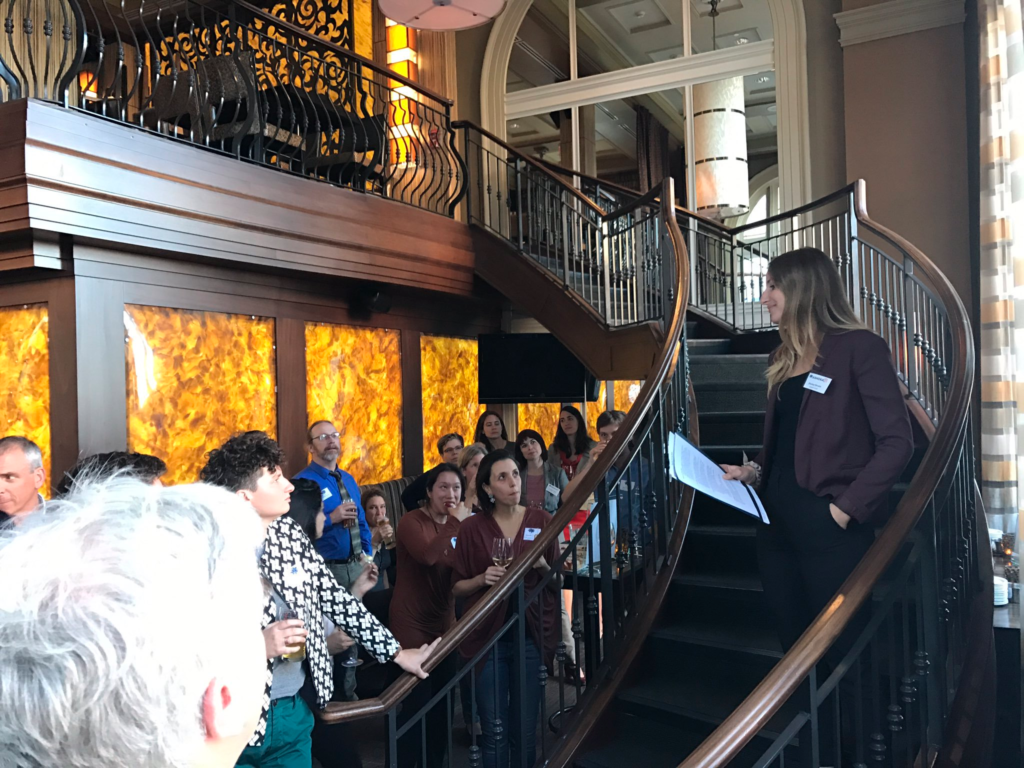 If successful, the candidate campuses will join the growing Ashoka U network which already includes Ryerson, Wilfrid Laurier, Simon Fraser and Mount Royal Universities in Canada. Georgian College is poised to become the first community college to earn the prestigious designation. Royal Roads would be the first blended Changemaker Campus as it offers both online and in-person programs.

The goal of the campus designation process is to develop and empower change leaders within the institution to truly bring their potential social innovations and impact on future changemakers into reality. And it doesn’t stop at the campus. Danica drove this point home saying, “we see everyone in this room as essential partners in creating a new educational system that fosters changemakers and remains relevant and responsive to societal needs”.

Yanique Bird is a communications associate at Ashoka Canada, an Antiguan Torontonian and an intellectual adventurer. Her academic meanderings have taken her through biology, chemistry, psychology, philosophy and marketing. When not obsessing about how to use her powers for good, she can be found singing karaoke, cycling with her bestie or feeding people. @Yanique__YYZ