‘Journalism is the Voice of Democracy’: Documentary follows courageous journalists of India’s only women-run newspaper

The powerful documentary “Writing With Fire” – which has been garnering acclaim across the film festival circuit, including the International Hot Docs Festival – follows the journalists of Khabar Lahariya, India’s only all-female newspaper located in the state of Uttar Pradesh. The paper is in the midst of transitioning from a print-only publication to a digital operation, a reality causing much trepidation among its employees, many of whom are tech newbies. But that’s not the only challenge the reporters face. 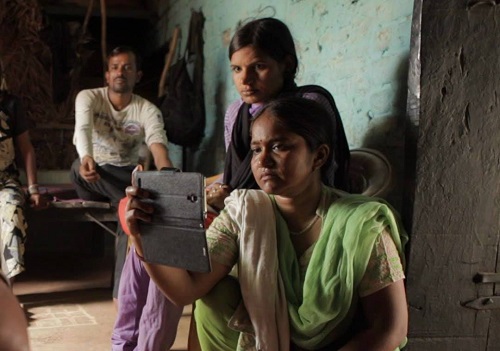 The all-female newspaper battles numerous obstacles in pursuit of justice

You see, Khabar Lahariya is run by women of the Dalit caste, the lowest in India (formerly referred to as the “untouchables”) and their reporters are represented by Dalit, Muslim or other marginalized women. Here’s where the courageous stories emerge. It’s hard enough to garner respect as women reporters in a largely patriarchal society but their social status only adds to the complexity in a country where upper caste men typically hold the position journalist.

We watch as these intrepid reporters push against the cultural and societal barriers in order to speak – or, rather, write – truth to power. As Meera, one of the main subjects in the documentary explains, “Journalism is the voice of democracy,” a sentiment that reverberates throughout the film. It’s one reflected in another colleague’s assertion too: “Journalism gives me the power to fight for justice.”

And fight for justice they do. As the journalists pursue their stories – from illegal mining to the upcoming elections and sexual violence – we witness the impact of empowered storytelling. Grassroots initiatives are given a boost and the powerful are held to account thanks to the reporting of Khabar Lahariya’s employees. Meanwhile, the paper’s online views soar from one million to 150 million by the time the film concludes.

SEE Change spoke with “Writing With Fire” directors/producers Rintu Thomas and Sushmit Ghosh to learn more about the film’s inspirational changemakers, the challenges ahead, and how these women are redefining democracy and the pursuit of justice in their homeland.

What inspired you to make this film and document the story?

We have been making independent non-fiction films in India for over a decade and, as filmmakers, we have found ourselves naturally attracted to stories of outliers – people who have inherited inequity but are determined to transform it through their lives. Meera, Suneeta, Shyamkali are women born into one of the cruelest social hierarchies in the world. How they negotiate these baked-in structures of caste and gender, using the most non-violent tools of knowledge – journalism – is the story that we set out to tell.

And, in the process, the film assumes the role of being an amplifier of Khabar Lahariya’s work, spirit and purpose. Moreover, in our popular visual culture, representations of Dalit women have mostly been as victims of their circumstances. In its visual language and syntax, “Writing With Fire” is a portrayal of the modern Indian Dalit woman. The form of the documentary allows us to delve into the complex world of our protagonists who are full-bodied characters, narrators of their own stories. So in many ways, the film is also re-writing a new language of representation.

In your opinion, how important is journalism to a healthy democracy?

In “Writing With Fire”, Meera (the protagonist) says journalism is the essence of a democracy. But what we’ve witnessed in India, as in many other parts of the world, is an erosion of the independent press and the rise of mainstream outlets that have now become agents of absolute chaos. So in this context, the work of independent journalists like Meera and her team at Khabar Lahariya becomes even more critical for the survival of truth.

Any updates you can provide on the newspaper or the women in the film? Have there been any new challenges due to the pandemic or otherwise?

The pandemic has been one of Khabar Lahariya’s busiest years. They have pivoted to focus on stories that are missing from the mainstream media narrative, focusing on rural healthcare in India and the importance of prioritizing on women while designing policies around COVID healthcare. They’ve also used this time to forge new alliances with other institutions that have further strengthened their work on the ground.

Do you think this publication can have any long-term impact on the way Dalits are recognized in India?

The very fact that a media institution led by Dalit women not only exists, but is thriving in India, is itself a significant achievement. What makes this extraordinary is that these journalists are working in a region known for endemic levels of corruption as well as a culture of violence against women and Dalits. The fact that almost all mainstream journalists in this region are ‘upper-caste’ men is a story in itself. So to have an independent news agency led by Dalit women is nothing short of a revolution.

Having filmed closely with the journalists for five years, it’s been interesting to see how people have responded and experienced the power of a Dalit woman with a camera. In fact, many scenes in “Writing With Fire” are testimony to how these women journalists are challenging social and cultural systems through their work, slowly but steadily redefining how women are perceived.

What more needs to happen for real change?

Issues around race, caste, ethnicity and gender have led to some of modern society’s greatest conflicts. So, for any real shot at change, there has to be a concerted effort at all levels of the socio-political pyramid for any tangible outcomes to surface at both a local and a global level.

What is your hope for the future of the publication and of India in general in terms of social change?

These are ambitious women journalists who are looking to expand their work into new geographies across India and we hope that their dreams of becoming India’s leading Hindi news agency pushes through – they’d not only be breaking the news clutter we’re all in now, but breaking a lot of socio-cultural stereotypes in this country. And it is in the success of vibrant citizen led movements for change that has continued to ensure that India remains a constantly evolving and dynamic democracy.