It’s been three years since human rights lawyer Nasrin Sotoudeh was incarcerated as a political prisoner in Iran. Her inspirational story – one that saw her rise to prominence as the defender of the country’s marginalized (women, children, religious minorities, journalists etc.) – is poignantly and powerfully told in the documentary “Nasrin”. 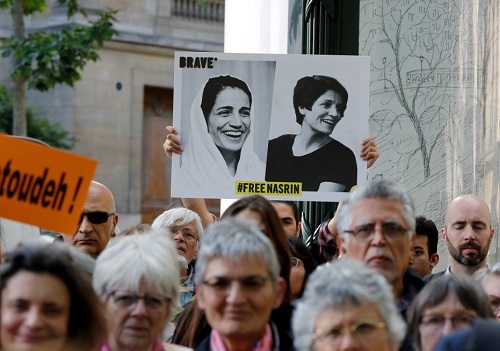 Sotoudeh’s imprisonment has led to a global campaign “freenasrin”

Along the way, the film also offers an eye-opening look at the state of affairs in the Middle Eastern country, one ruled with a tight fist by an extremist President, Mahmoud Ahmadinejad, who responds to dissent with zero tolerance. In fact, halfway through the documentary – in 2018 –  Sotoudeh herself was arrested (for representing a young woman protesting Iran’s mandatory hijab law) and sentenced to 38 years in prison, plus 148 lashes. After a hunger strike, a health crisis (due to COVID and heart problems), Nasrin was let out briefly, but is now back in prison.

Aside from chronicling the 58-year-old lawyer’s courageous fight for human rights, “Nasrin” also follows other activists –  like Nobel Peace Prize Laureate Shirin Ebadi – committed to social change in Iran. The hope is that their efforts, combined with an international campaign to free Sotoudeh and fellow political prisoners, will spark some movement in the right direction.

The film was an especially difficult one to shoot. Filmmakers Jeff Kaufman and Marcia Ross were unable to get a visa into the country so they turned to Iranian videographers who remained anonymous for their own protection. SEE Change spoke with them recently to learn more about the film, the challenges they faced in bringing the story to life, and their ongoing efforts to release Sotoudeh from captivity (a social media campaign with the hashtag #FreeNasrin has attracted widespread support from across the globe).

What inspired you to document Nasrin’s story. Why now?

We wanted to tell Nasrin Sotoudeh’s story because she embodies a commitment to democracy, justice, and political courage; the power of women to shape society; and a deep conviction that people of all faiths and backgrounds deserve equal opportunity and protection. She is also a fierce, funny, and resilient individual, supported at home and in her work by her loving husband, and she has repeatedly put herself at risk to serve others.

In 2011, Jeff did a short documentary with Amnesty International about the persecution of the Baha’i Faith in Iran (“Education Under Fire”). He was deeply moved by the stories he heard of Muslim men and women putting themselves at great risk to help their Baha’i neighbors. That project involved working with people inside and outside Iran, and it also deepened an appreciation for the country’s rich and diverse culture. Over the years the idea of expanding on these concerns from another perspective kept coming back.

We started work on this documentary around the time the former president proposed a Muslim travel ban: May 2016. That policy came out of a cynical political effort to demonize Islam and push for conflict with Iran. It’s based on a stereotype that is not only wrong, but it misses that fact that there is much we can learn from the people and culture of that often-misunderstood country.

Nasrin was arrested as we were filming, in June 2018, for defending women who protested Iran’s mandatory head-scarf law by publicly removing their hijabs. She was sentenced to decades in prison and dozens of lashes, but she continues to challenge the authorities from the confines of her cell. Now in 2021, with Iran – US tensions at a new height, and human rights (and democracy itself) at risk around the world, Nasrin’s story is more vital than ever.

How were you able to coordinate the anonymous filmmakers on the ground in Iran?

Carefully, and with respect and gratitude. We made sure at every step that our project did not put anyone (behind or in front of the camera) at risk. We were able ask for some specific shots or kinds of sequences, and there were also some great surprises. It was also a challenge getting the footage out of Iran.

Related to above, how challenging was it to get this film completed?

Jeff had done several previous films about Iran, so we weren’t able to travel there. Even if we could, having an American film crew follow Nasrin would not have been a good way to get the kind of access we wanted.

Just some of the challenges were: Protecting the identity of contributors in Iran who needed to be anonymous, getting footage out of the country, making absolute sure that everyone featured in the film wanted to be on camera and that they signed a detailed agreement, trying to raise funding for a project that we were keeping secret (that meant no crowdsourcing or public fundraising), working with translators who made sure every moment of dialogue is accurate down to the smallest sigh or comma, and always worrying about the health and safety of our colleagues in Iran.

What are the so-called offences that led to Nasrin’s incarceration?

I wouldn’t call them “offenses” because that implied Nasrin committed some inappropriate or illegal actions, which she did not. More accurate is to call them bogus charges designed to silent Nasrin and intimidate other human rights activists.

She was arrested on June 13, 2018 but not informed at the time of the charges against her. On March 11, 2019, Nasrin was sentenced to 33 years in prison and 148 lashes and was denied access to a copy of the verdict against her. She was only permitted to see the text of the sentence and to note the charges of which she was convicted.

According to her lawyer, she was tried in absentia and denied access to a copy of the verdict against her. She was charged with espionage, dissemination of propaganda and disparaging the Supreme Leader of Iran, Ali Khamenei. She was also given a five-year imprisonment for “acting against national security”

Tell us about the campaign that was initiated to raise awareness about Nasrin’s plight. Do you remain hopeful that it can have an impact?

Our goal is to have the documentary “Nasrin” and the campaign for Nasrin Sotoudeh spark awareness, concern, and action on behalf of human rights and at-risk activists around the globe. In numerous events, we have worked closely with an array of internationally respected organizations, including: Amnesty International USA, PEN America, RFK Human Rights, Ms. Magazine, The Feminist Majority Foundation, The American Bar Association, The International Bar Association, Parliamentarians for Global Action, and The Center for Women’s Global Leadership.

A few months ago, we launched an awareness campaign with Nasrin and Saudi women’s rights activist Loujain al-Hathloul. This unique effort broke through religious and political barriers to offer a shared message in support of women’s rights and freedom of speech. It included an event hosted by PEN America, RFK Human Rights, and Amnesty International that presented personal stories from endangered human rights activists in Uganda, Vietnam, Belarus, China, Saudi Arabia, and Iran.

There are other social media outreach efforts being planned for the months to come.