Never Underestimate the Power of Young People to Effect Change

“They say no laws could have prevented the hundreds of senseless tragedies that have occurred. We call B.S. That us kids don’t know what we’re talking about, that we’re too young to understand how the government works. We call B.S.”  –  Emma Gonzalez, a senior at Marjory Stoneman Douglas High School 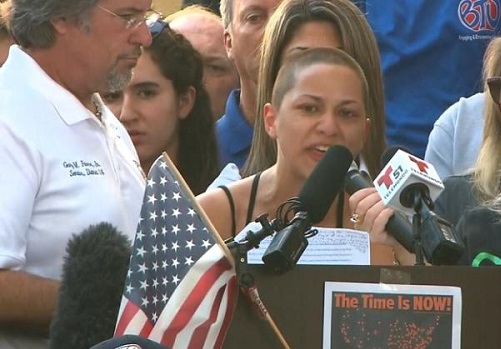 It’s been a strange couple of weeks, to say the least. We’ve witnessed pure evil and unimaginable pain. We’ve seen total system breakdown, one domino toppling the next and then the next, and we’ve watched it all unfold as if through the rear-view mirror, backwards, helpless.

And we’ve seen humanity emerge from the rubble with a resounding cry of resilience, empowered and determined. Of course, we’ve seen it before. The fury, the pain, the calls for change, the well-intentioned placards of solidarity. But life gets busy and we’ve got things to do, bills to pay and other day-to-day tasks to cross off our list. So we move on, continue our life – until the next tragedy that upends our blinders and the semblance of safety within which we’ve cocooned ourselves.

But this time it just may be different. This time the demand for change is even louder, resonating even deeper like a clarion call, one stemming from years of anger, pain, promises broken and pleas ignored. And this time the young leaders are heeding the call like never before. And they’re smart, savvy and highly knowledgeable about their democratic institutions (thank you teachers!) and its political machinations. So, as adults become increasingly entangled in polarizing and circular arguments, as they grow ever-paralyzed by deference and fear, young powerhouses like Emma Gonzalez are speaking out and taking action.

Still, there are those who doubt the young. Teens are fickle, they say, prone to changing opinions on a dime, jumping onto bandwagons willy-nilly. Youth can’t lead, they argue, and they certainly have no business trying to influence policy or promoting social change.

Here’s the thing: young people have been at the forefront of social change throughout history. Take a look at the American civil rights movement in the 1960s. From its very beginnings, youth and student activists were significant players in moving the needle of change forward. Eighteen-year-old class president Charles Avery led 800 of his fellow students out of the doors of his high school in Alabama on a 10-mile walk to Birmingham City. Their march had far-reaching implications, as Lottie L. Joyner describes in this Daily Beast article How the Children of Birmingham Changed the Civil-Rights Movement.

Then there’s the power of a young girl named Malala Yousafzai, who, at the age of 17 was the youngest person ever to be awarded the Nobel Peace Prize. Her will to survive an assassination attempt by the Taliban when she was an adolescent (and already an activist) propelled her to champion the rights of young girls and women in her country and around the world.

Joshua Wong, another young activist, founded Scholarism while in secondary school. Through his efforts, Wong established himself as the face of the pro-democracy movement in Hong Kong, inspiring other youth and multiple generations of adults into action.

And let’s not forget Canadian Craig Kielburger. He was just 12 years old in 1995 when he became impassioned about child labour rights. Jump, or rather leap, forward and today Kielburger is one of the most respected human rights advocates in the world thanks to his work with Free the Children, Me to We, We Day and a lot more.

Just a few of the many examples of young leaders capable of significant impact. Exhausted by indifference and ineptitude, inspired by the desperate need for change and supported by community, these young changemakers are turning anger into passion and pain into movement forward. And like all those who helped fuel social movements before them, I say “look out world, here they come”.

Elisa Birnbaum is the publisher & editor-in-chief of SEE Change Magazine and the host of its podcast. Her first book on social entrepreneurs tackling challenges in their communities and their lessons learned, will be published this May.