‘One of the Greatest Animal Ethical Issues of our Time’: Documentary follows the plight of the right whale

The facts are clear: North Atlantic right whales are facing extinction. With less than 400 remaining (only 90 of whom breeding females), these beautiful, gentle giants are dying at a rate of 24 per year, largely due to human behaviour. Whether struck by fast-moving ships or entangled in the abundance of fishing gear found in the waters they call home, the whales are in serious danger. That climate change  – and its impact on warming oceans – has forced the whales to search for food in new and more dangerous places doesn’t help either.

The good news is their plight is fueling a movement and pleas for change.

The film, “Last of the Right Whales” follows a disparate group of people – a wildlife photographer, a marine biologist, a whale rescuer, and a crab fisher -united in their cause to save the North Atlantic right whale. Working together, these unique allies are determined to stem the tide of the world’s first great whale extinction. 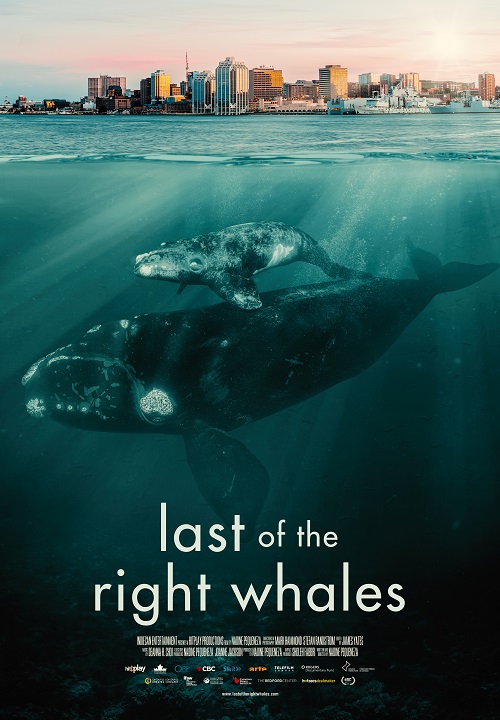 The feature documentary brings viewers on a captivating and impassioned journey – from the whales’ calving ground off the coast of Florida to their new feeding area in the Gulf of St. Lawrence – highlighting the daily challenges they face and the innovative, inspired ideas put into action to save them. “Once you have a vertical line and a whale in the same area, there’s a risk,” shares Martin Noël, a crab fisher from New Brunswick who has adopted the less risky pop-up fishing technology into his practice. “We have a responsibility to do less damage to that species.”

Directed by award-winning filmmaker Nadine Pequeneza, Last of the Right Whales had its world premiere at the Calgary International Film Festival on Sunday September 26 and will be making its way to a theatre near you. In anticipation of the premiere we spoke with Pequeneza about the reason she made the film, the plight of right whales, the changemakers looking for answers and what she’s learned along the way.

What inspired you to work on this film? Why now?

It was the multiple deaths, 17 in a few short months, what scientists called an unusual mortality event, that grabbed my attention in 2017. At the time I had never heard of a North Atlantic right whale let alone so many dying, seemingly inexplicably, all at once. When I learned it was us that was unintentionally killing them and that we could have prevented those deaths, I knew this is a story that other people would want to hear. Living in cities as most of us do, often many kilometers from the ocean, it’s not surprising that we are disconnected from the marine world. But I truly believe people when people see what is happening to the North Atlantic right whale they’ll support the changes necessary to protect this species and the world’s oceans.

What would you like people to know about right whales that can (hopefully) make their plight more of a priority?

The North Atlantic right whale has survived the threat of extinction more than once, both times with our help; when we banned whaling in the 1930s and more recently when we moved shipping lanes, slowed ocean traffic and closed fishing zones in time with the whale migration. Now with a rapidly warming planet threatening their survival, we have a third chance to save this great whale from extinction. This time the renewed threats facing right whales are exacerbated by climate change. A warming ocean has forced them further north in search of food forcing them into busy shipping and fishing areas in the Gulf of St. Lawrence.  Protecting right whales from extinction means protecting their habitat, our oceans, our climate. Their survival is ultimately linked to our own.

In the film one fisherman adopts a new innovation to stem the issue of fishing nets. Tell us more about how it works, whether it’s been adopted by others and its impact so far

Martin Noël is a third generation fisher from Shippagan, New Brunswick on the tip of Canada’s Acadian Peninsula. Since the 2017 fishing season, when 12 right whales died in Canadian waters, fishing area closures in the Gulf of St. Lawrence have impacted Canada’s fishing communities. In 2018 Noël and other crab and lobster fishers began testing pop-up fishing technology in the North Atlantic. The pop-up system uses an acoustic signal to release a trap line from the bottom of the ocean allowing fishers to haul their catch.  This eliminates the need for a fixed vertical line in the water column, which is what entangles many marine animals, not just right whales. Pop-up systems have been used commercially in the Australian lobster fishery since 2012 but each fishery is different; with different trap sizes, sea conditions and government regulations.  At the moment fishers in both Canada and the U.S. continue to test the commercial viability of pop-up gear for use in the snow crab and lobster fisheries.

Are there any other innovations out there that can stem the problems of vessel strikes or fishing nets?

Fishing gear entanglement is the leading cause of right whale injury and mortality, 85 percent of the population has been entangled at least once. The second leading cause of right whale deaths is vessel strikes. Depending on the size of both the vessel and the whale; everything from a recreational fishing boat to a large container ship can be deadly if the vessel is travelling too fast. To protect this species captains simply have to slow down in whale habitats (under 10 knots) and always keep a lookout for whales. As consumers we need to accept that the goods we order may take a little longer to ship or better yet we’ll buy more locally.  You know, the film follows a whale named Snow Cone and her calf over the course of nearly two years. The story of what happened to them reveals everything about why the North Atlantic right whale is facing extinction and how we can save them.

How hopeful are you that we can save more right whales in the future?

The commitment and determination of the people featured in the film is inspiring. The collaboration between the film’s impact partners who have joined forces to protect the North Atlantic right whale is powerful – IFAW, Sierra Club, Canadian Wildlife Federation, Canadian Whale Institute and Oceans North. People’s reaction to the film and their desire to get involved in the movement to save this great whale from extinction is palpable. I am hopeful that our species can do the right thing for these whales, for ourselves and the planet.

“Last of the Right Whales” is set to have its world premiere at Calgary International Film Festival Sunday, September 26 at 7PM. It will be making its way to theatres shortly thereafter.