Transforming Plastic Waste into Works of Art in the Solomon Islands

The whole world is on a campaign against plastic waste. Some rely on legal prohibitions, others argue for practical alternatives or develop tools to clean up the oceans. A group of women in the Solomon Islands in the South Pacific are using their creativity as a weapon against the overwhelming pollution of their island.

Elegant floral arrangements adorn one of the tables. On another, bright yellow garlands sit next to greeting cards while earrings in all the colours of the rainbow are laid out on a third table. “Men throw away plastic, we women collect it and make something beautiful out of it,” Josephine says with a mischievous grin and proudly shows me her orange earrings. “I got them in an exchange for a bag I made out of an old umbrella.” The plucky lady is one of thirty women who have gathered in the town of Gizo in the Western Province of the Solomon Islands to introduce me to their products. Products that are all made from recycled plastic.

Men throw away plastic, we women make something beautiful out of it

There is a lot of it on the island of Ghizo. Shiny biscuit wrappings, bags used for milk or cream that people put in their teas, green Sprite bottles – plastic waste has long become part of the streetscape in the archipelago, which is often hit by earthquakes and tsunamis. “We do not have any waste management here,” complains Rendy Solomon, chief environmental health officer for the region and founder of Plasticwise Gizo. 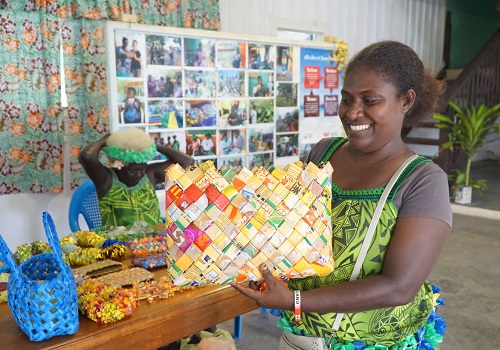 Bag made of plastic waste

Four years ago, red wooden rubbish sites were set up to collect household waste and transport it weekly to a waste depot. The overflowing rubbish sites, however, demonstrate (in a quite visible and smelly way) the failure of that idea. It is not the only thing that works better on paper. On July 1, 2018, the region issued a plastic ban. Silently, it seems, because, without information and legislation, it remains another ineffective attempt to master the piles of plastic effectively.

“In our society, men take all the decisions,” explains Solomon, “but we women must be part of the solution.” After all, women in the Melanesian culture are not just responsible for the household, the care of the family, but also have parenting responsibilities. “We need a healthy environment for all of this,” adds Solomon. “Where should we grow our food if our island drowns in the garbage? Where should we live if there is no space?” 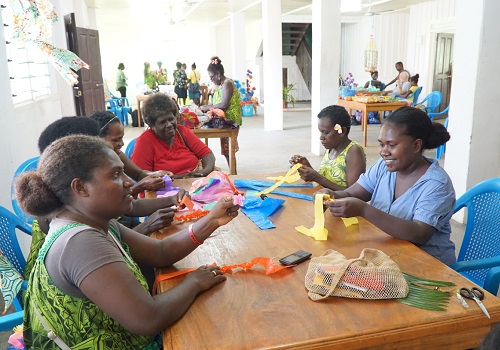 For years, Solomon has been working to give women a voice. From childless widows to single women, from civil servants to housewives – women of different ages, religions, backgrounds and educational levels meet in groups, on an equal level, to discuss their concerns. This is quite unique on the Solomon Islands. “We used to just greet each other in the street,” says Esther, who wears a green plastic flower in her white hair. “Now we’ve become friends. We talk and learn from each other. This strengthens and encourages us enormously.”

In addition, the groups are a good place for raising awareness and sharing information. “Many women use plastic to light the fire on the oven,” explains Solomon. “They are often untrained and know the negative impact on health and the environment but they understand quickly. If you explain something to them, they take it on.”

Plasticwise Gizo is the best proof of that. Since Solomon founded the group with the support of volunteer Yuko Furukawa from the Japan International Co-operation Agency, a lot has happened. Collective street cleanups, school projects on waste disposal, radio programs on proper waste separation, compost- and plastics-handicraft workshops and markets, where the creative recycling products are sold – the number of activities the group has initiated could make you dizzy. What began in May 2017 as a small five-women team has grown at record speed to a professional club with over 100 members – including three men. 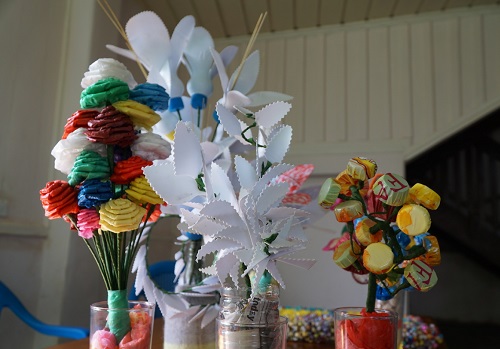 Beautiful artwork made from plastic waste

Meanwhile, as part of the Networks for Sustainable Environment, the group not only works with 15 local NGOs and UN Women but was also recognized by the Australian organization Plasticwise as its first international branch in August 2017. Now, Plasticwise Gizo is looking for donations and funding for their activities. The financial part is just one of the challenges Solomon faces in the near future.

“This is so clever, everybody is in awe [of] how plain, white bleach bottles can be turned into elegant floral arrangements,” says Mezie, the creator of the artwork. “I hope to earn money soon,….”then I’ll continue.” Pop-up stands and street fairs highlight the potential for these projects, especially in the touristy Gizo that attracts cruise ships as well as expats. “We want to establish a market for these works of art,” says Solomon of her short-term plans. “It should be a centre where we raise awareness of the waste issue and inform and inspire others.” 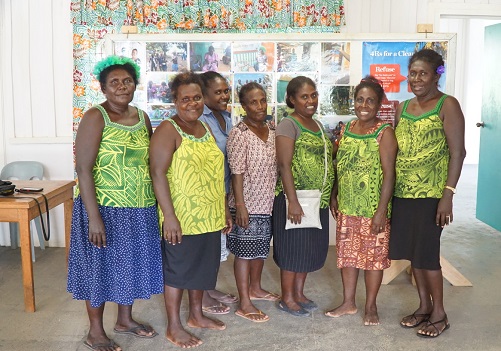 The colourful plastic bags, basket-woven baskets and gaudy pieces of jewelry are already getting attention – and not just in Gizo. Neighbouring Noro on the island of Santa Isabelle invited Plasticwise Gizo to teach them how to craft their own recycled artworks. “Plus, we’re bringing our know-how and ideas to our villages,” says Josephine, well-aware of the women’s responsibility. “There are many very talented women there – and a lot of plastic.”

As a freelance journalist, Doris Neubauer has followed her itchy feet: she volunteered in communities in Hawaii, built a mud house in Uganda and sailed around New Zealand. Her main inspirations are people that want to change the world.